The HTC EVO 4G LTE hands on video comes our way courtesy of the guys over at Pocket Now who attended the event in New York City and managed to get a little playtime with the new Android Ice Cream Sandwich handset for Sprint.

The HTC EVO 4G LTE is apparently very similar to the HTC One X but with the addition of Sprint LTE and HD voice capability, along with a redesigned two-tone case and the inclusion of a red kickstand on its rear. The EVO 4G LTE also brings a beefier battery to the game with a 2000mAh battery rather than the 1800mAh battery found in the GSM version.

They guys say their first impressions of the device is that it is quite a slender handset that sports a ‘jaw dropping’ display, whilst the rear of the device has a glossy black top portion and a rubbery plastic lower portion separated by that red coloured kickstand.

Anyway, that’s enough of my babbling, I figure you’d much prefer to head on down and mash that play button to check out the video, so if you haven’t already done so, get to it and enjoy. Are you hoping to pick up the HTC EVO 4G LTE from Sprint once the device is released? 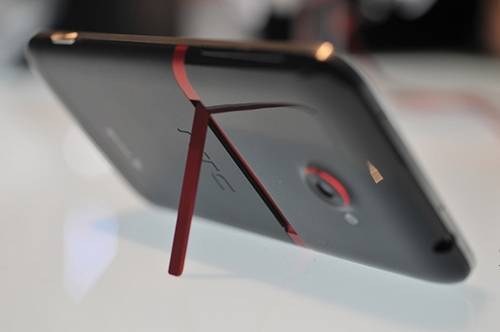