The 120 quid Nokia Play 360 is a wireless Bluetooth enabled speaker that offers 360 degree sound, and includes a 3.5mm jack and in Near Field Communication compatible. The Nokia Play 360 can pair with handsets by simply tapping the handset to the speaker, and comes complete with a long lasting rechargeable battery that offers up to 20 hours of life and can be charged via the same microUSB charger that comes with the Nokia Lumia 900 smartphone.

The Nokia Lumia 900 Windows Phone is available to pre-order as of right now from Phones 4 U and will become available online and in store as of the 27th of this month on several carrier tariffs as a free handset.

A quick spec run-down, the Nokia Lumia 900 offers a 4.3-inch AMOLED ClearBlack touch screen along with an 8 megapixel rear facing camera, 1 megapixel front facing HD camera, 16GB internal memory, 1.4Ghz processor and Windows Phone 7.5 operating system, so any of our UK readers going to be pre-ordering the Nokia Lumia 900 in white from Phones 4 U? 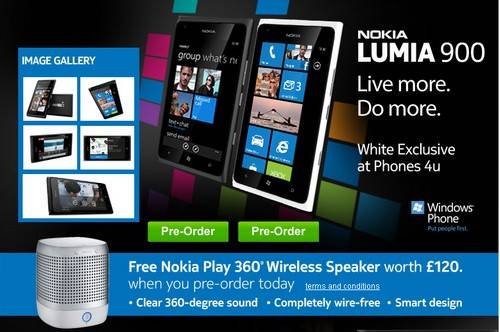 One thought on “Phones 4 U White Nokia Lumia 900: Free Speaker”