For those that have a large amount of cash to part with and would like to own an electric car that can play nice with your smartphone, the new 2012 Ford Focus Electric, Ford’s first electric vehicle has now been unveiled, and can go up to a hundred miles on a single charge and apparently is very low cost at possibly a dollar to do 100 miles.

And the guys over at Cnet were on hand to have a go with the 2012 Ford Focus Electric and made a video of the occasion, which of course we have for your viewing pleasure below.

The 2012 Ford Focus Electric car can also interact with your smartphone via the MyFord Mobile app that gives the user real time feedback on their range and charge status with charge stations shown on a map so you can plan your day and locate the nearest charge station to your location.

The MyFord Mobile app will be available for the iPhone, Android devices and BlackBerry handset on launch, and will also deliver a notification if the vehicle isn’t charging, instruct the system to imediately charge, and is integrated with a system known as Microsoft Value Charging that delivers power rates for the owner’s postcode and thus allows the driver to charge the car when rates are at their lowest.

The 2012 Ford Focus Electric is expected to be available in the first half of 2012 in California, New jersey and New York followed by another 19 markets by the end of 2012 and commands a starting price of $39,200. 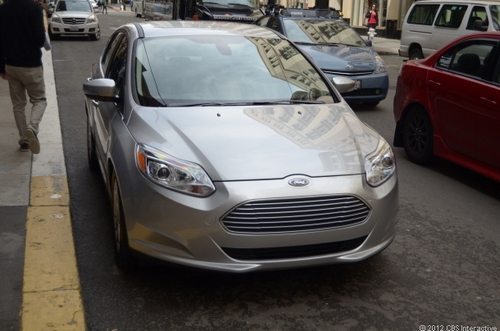