Some of our most popular topics lately have been about Kickstarter projects. We can’t speak highly enough of this innovative website that enables people to pitch ideas for future products and receive pledges towards funding development within a particular time frame. Today we have news of another Kickstarter project, the Trigger Happy Camera Remote for iOS and Android.

The last Kickstarter project we brought you news about was the Pebble watch for iPhone and Android, which required a target amount of $100,000 and has already received over $3 million in funding. An astounding success by anybody’s reckoning. No doubt the developers of the Trigger Happy Camera Remote hoped for the same success and we can tell you that of a $25,000 goal over $158,000 from more than 2,500 backers has now been pledged, another great hit for Kickstarter.

A little about the Trigger Happy Camera Remote for iOS and Android then. TriggerHappy is patent-pending and is a camera remote, which can be used to control your camera with an iOS or Android device. It consists of a TriggerHappy Unit, a one-meter cable that connects your camera and phone and has a small embedded signal processor and also a TriggerHappy App, which will be available through the Apple App Store and also Google Play.

The TriggerHappy app functions include a camera trigger, bulb functionality for exposures between 1 second and 24 hours, a time-lapse mode, HDR mode and bramping (bulb ramping). More features currently in development include face detection, lightning detection and audio wave form detection along with ability to trigger the camera when the accelerometer data of the phone changes.

The Trigger Happy Camera Remote is compatible with any iOS or Android device as long it has a standard 3.5mm audio jack. It will work for not just the iPhone but also the iPad and iPod touch. A long list of cameras are supported and if you want to see every camera then head to this Kickstarter link for more. Trigger Happy could ship as early as June and if you want to see more about it then check out a video that we’ve embedded below this story.

What do you think about the Trigger Happy Camera Remote for iOS and Android? Are you tempted to make a pledge? 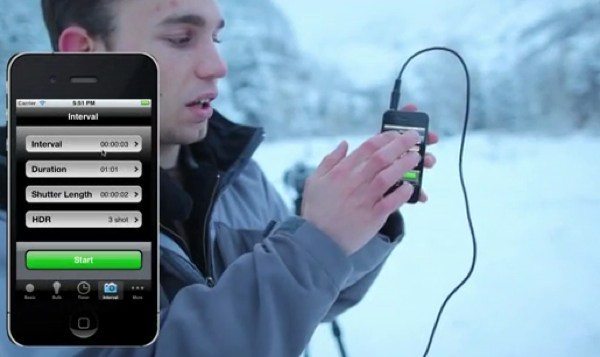