Back in Feb the Google guys delivered Google Chrome for Android, with additional features such as tab syncing, and a more intuitive user interface over the stock browser, and of course that release was a beta release, which has left some of the Android faithful out there wondering just when will the Google guys get round to releasing a final version of Google Chrome for Android.

Well, according to the guys over at Slash Gear, the senior VP of Chrome and Apps at Google, Sundar Pichai, has stated that Google Chrome for Android will finally lose its beta status in a matter of weeks, but apparently didn’t add any more detail, so just how many weeks remains unclear.

However the Google guys have been working on updating the browser and adding features whilst getting rid of bugs, and desktop mode was added last week, which allows the user to switch between desktop and mobile versions of a website, and even download support has now been added.

Unfortunately though the real issue with Chrome for Android is that it is just for devices that run Android Ice Cream Sandwich, so anyone on an earlier OS can’t make use of what Chrome for Android offers, especially when you consider that the bulk of Android users are still running Android 2.3 Gingerbread or lower, whilst just 2.9 percent of Android users have Android 4.0 installed.

So perhaps if Google really wants Chrome for Android to take off they need to be working on making sure it can work efficiently on earlier versions of Android, although of course they are probably working to make sure everything runs smoothly on ICS first. For those ICS device users that haven’t yet downloaded Google Chrome Beta you can do so for free by hitting up Google Play. 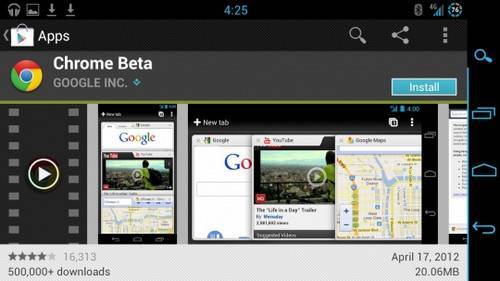