The other day game maker Zynga launched a new mobile game on the Android platform called ZombieSmash, a game that tests your skills at survival by teaming up with unlikely allies to battle zombies, and to celebrate the launch of ZombieSmash for Android, the Zynga guys decided to turn the green Android robot outside Google HQ into a zombie robot.

And of course we have that Android robot Zynga makeover footage for your viewing consideration below, whereby the Zynga guys attempt to make the Android mascot look like the ZombieSmash character depicted in the mobile apps icon.

The ZombieSmash app for Android has the gamer playing the character Joey, who is a lone survivor that is pitted against unrelenting zombies, and in order to kill off the attacking zombie hoards the gamer has to use their finger to flick and smash them until they finally die.

The ZombieSmash app features four game modes, Campaign mode where the gamer has to survive for 31 days and another 30 nights in the new Camp Nowhere campaign, Endless siege mode, where the gamer has to hold out for as long as possible, Sandbox mode, which gives the gamer all the tools to kill off the zombie attacks, and Bonus Nights mode, that lets you kill off zombies in new ways.

ZombieSmash for Android also features in excess of 30 specials and upgrades including liquid nitrogen, a gigantic rolling bolder, wrecking balls and asteroids to destroy the zombies, along with an original soundtrack.

For those Android gamers that would like to check out ZombieSmash they can download the app from Google Play at a cost of just Â£0.99, and don’t forget to head on down and mash that play button to check out Zynga turning the Android robot into a zombie…enjoy. 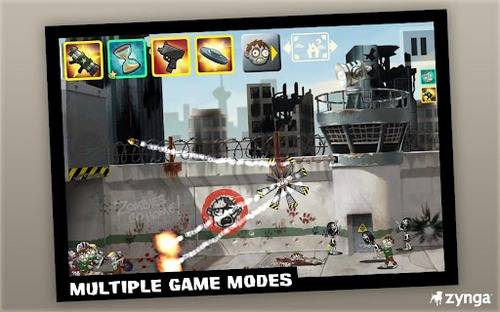