The Avengers apps worth having for 2012

Currently the big movie release at the cinema is The Avengers so we thought we would round up some of the best apps worth having for 2012 for both the Android and iOS platforms,

First we have a free Android application titled The Avengers Live Wallpaper that allows you to assemble Earth’s mightiest heroes with the official Avengers Live Wallpaper. The free version of the app features the superhero team’s logo hovering over a destroyed New York City street, or the full version can be unlocked for only $0.99 and includes all of your favourite hero characters. Hit Google Play to download.

Another Android application we have for you is Avengers Live Wallpapers that costs only Â£0.69 to download via Google Play. This application will provide your mobile device with an amazing and realistic animated wallpaper.

Next up for Android and iOS users we have the free Super Hero Augmented Reality, which allows you to take pictures with your favourite Avengers as they appear life-size in Walmart stores. Users can unlock characters by finding Avengers signage in the Walmart stores, and then save the world by playing as the Avengers as you do battle with Loki and his minions all in a 360 degree real world surrounding. The app supports iPhone 4/4S and iPad 2/3, and is available via the App Store or Google Play.

The Avengers-Iron Man Mark VII is a free Android application and is a great interactive comic book experience that features over fifteen pages of an all new story, hit musical soundtrack from the Iron Man and Iron Man II movies, innovative new sliding panel navigation to immerse you in comics like never before, and much more. Head over to Google Play for more information and to download.

Last up we have Avengers Origins: Assemble! for the iOS platform that lets users experience the story of Captain America and the Avengers in a new format with this original Marvel App. Users will find interactive activities throughout, narration from Avengers co-creator Stan Lee, Action-packed Artwork, Sound Effects and Music, and much more. This can be found on the App Store priced at Â£3.99. 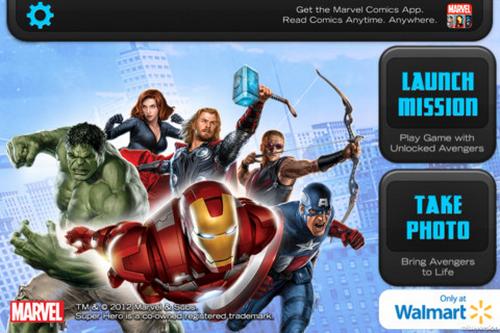 One thought on “The Avengers apps worth having for 2012”