Although we could still be many months away from an Apple iPhone 5 release the rumors still continue to rack up ahead of hopes that we may hear something more about it at Apple’s WWDC kicking off on June 11. We still feel a launch is more likely in the fall though and we’ll continue to bring you the latest speculation and developments while you wait. Today we have some more news regarding the hardware for the iPhone 5 and also on Maps and iOS 6.

Many of the recent leaks and rumors we’ve seen about the iPhone 5 appear to be more convincing than previously, probably because we’re getting closer to production and just in the last few days we’ve given news on the design and LTPS technology and a design sheet with possible features. Now we have more for you to digest from scrutiny of a beta version of iOS 6 that offers some clues about the hardware.

Even if the iPhone 5, or next iPhone, or whatever Apple choose to call it, is not revealed at WWDC we do believe that iOS 6 will play a major part in the event. 9to5Mac reports on hidden findings within the operating system beta such as Darwin Kernel Version 13.0.0 and interestingly point out this is “a full release above the most current developer version of MAC OS 10.8 Mountain Lion.” As well as this the XNU build (21XX vs 2050.5.8) is also higher.

The processor revealed is the Samsung ARM S5L8950X, thought to be produced where other A5X Apple processors are made, in Austin, Texas, which ties in rather nicely with our story yesterday about some iPhone 5 parts being manufactured in the US. The current iPhone uses the S5L8940X while the New iPad uses the S5L8945X so the S5L8950X looks to be quite an advancement. Although this doesn’t give away any details on processor speed, cores and more, 9to5 speculates that the best bet is a low power dual-core processor. At Apple the new processor is identified as the A5-XXX (9to5 Mac has removed the last three digits to protect the source) but the name is likely to be changed, although possibly not to the A6 that some had predicted.

Moving on to the GPU it seems more changes are afoot. The GPU chip is the SGX543RC* (asterisk represents a removed digit again) but nothing further on this is known yet and apparently this doesn’t even technically exist yet. The next iPhone will also have 1GB of RAM and will run the 6.0 seed 10A33X with iBoot version iBoot-153x.x. Another interesting snippet from 9to5Mac is that they have been informed that an iPhone 5 in October should easily be achieved as iOS 6 is well advanced and that in fact things are going so well that an earlier release is plausible. Interesting stuff!

We have previously reported on the move away from Google to Apple’s own iOS Maps app and an early screenshot has been revealed although it’s likely to undergo changes, such as fonts etc, before it releases. You can see the screenshot below this story, courtesy of 9to5Mac. The iPhone’s GPS/Compass icon is not connected to a 3D icon, negating earlier reports. Apparently the 3D icon will now be below the scroll/menu at the bottom right.

As you can see then, iPhone 5 news is still flooding in thick and fast and we shall, of course, continue to keep readers informed with all the latest. Are you waiting for the iPhone 5? Have you already decided you will purchase it, even before the specs, features and more have been confirmed? Maybe you’ll wait to see what it offers before making up your mind? Let us know with your comments. 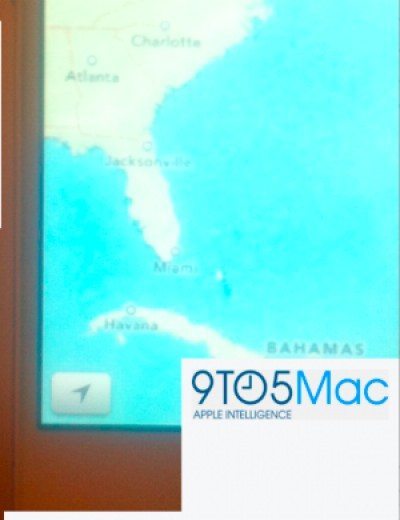