If you are a resident of an area near the Atlantic or Gulf coasts you will be well aware that we have now entered the hurricane season that runs to the end of November, and today we have some hurricane season 2012 apps to keep you informed.

First up for users of the iPhone, iPod Touch, and iPad and the Android platform is the free WPBF 25 Hurricane Tracker application that helps you monitor and track hurricanes and tropical storms. There are interactive maps, local shelters, evacuation zones, forecasts, and emergency numbers available on your device.

The application lets you know if you are in the storm’s path and the easy to follow ‘threat meter’ will show users when there’s reason for concern, and when all is quiet. Checklists can help you prepare your home and family in an event of a hurricane and up to the minute information is provided from the WPBF 25 newsroom. Despite only being available for a short time the app has received positive reviews, and to download head over to the App Store or Google Play.

Houston Hurricanes is another free application for iOS users and provides instant updates whenever there is a change in the path or strength of a storm and also includes forecasts, interactive maps, radar satellite and more. Houston Hurricanes is available on the App Store for the iPhone, iPad, and iPod Touch running iOS 4.0 or later.

WDSU Hurricane Central is an application for Android and iOS users that is again available as a free download that has maps tracking projected storm paths. Users will receive hurricane and tropical storm warnings and advisories, and live updates are provided via Live Wire, Facebook, and Twitter. To find out more and to download head over to Google Play or the App Store.

Finally for iOS users is the free iHurricane HD app that tracks multiple hurricanes at a time on an interactive map. Users are provided with email alerts and the distance between their location and each coordinate of the storm. Other features include the latest satellite information with National radar, and historical data provides information on this seasons past storms. iHurricane HD is available on the App Store for the iPhone, iPod Touch, and iPad running iOS 4.2 or later. 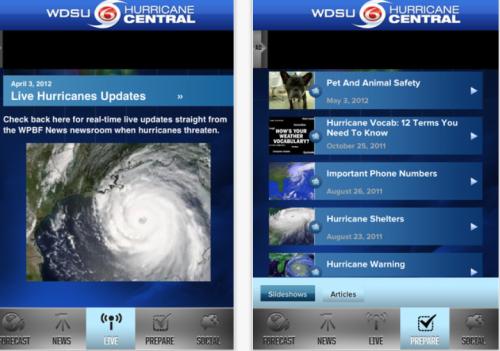