Regular readers may well remember that recently we brought you news of an upcoming 5-inch pixel-packed display by LG that we thought could well outdo the famed Retina Display of the Apple iPhone. We hoped to be hearing more about it at SID 2012 and that’s exactly what has happened as the Retina smashing LG 5-inch FHD display for smartphones has now been unveiled.

We told how the 5-inch 1080p display is based on AH-IPS (Advanced High Performance In-Plane Switching) technology and would have a 1920 x 1080 FHD (full HD) resolution and widescreen ratio of 16:9 and 500-nit brightness. Whereas the iPhone 4S Retina Display manages 326ppi the new LG display has a groundbreaking 440ppi, which sounds pretty astonishing and now it has been shown off in all its glory it’s certainly looking promising.

Engadget got a look at the latest LG FHD display and describes it as “absolutely gorgeous” in a video that accompanies its article. LG says it will be the first FHD display used on any smartphone, although it has not yet been associated with any particular smartphone just yet. They also managed to speak to LG’s VP of IT and Mobile Technology, Dr. Byeong-Koo Kim and gathered some more information about this notable display.

LG has been working on the display since 2011 and the first of the new five-inch mobile displays are set to go on sale in devices later in 2012. Dr Kim also told how larger screens are already popular in China, Japan and Korea and how LG expects the 5-inch displays to grow in popularity across the rest of the world, especially as HD content becomes increasingly abundant. As well as this Dr. Kim told how full HD products will be concentrated on by LG in the future and also noted an interest in flexible OLED displays.

We can’t wait to see these displays come to mobile devices and wonder what you think. Do you think the LG 5-inch displays will become dominant in the display market? When buying a new smartphone how important for you is the quality of the display? Let us have your comments on this. 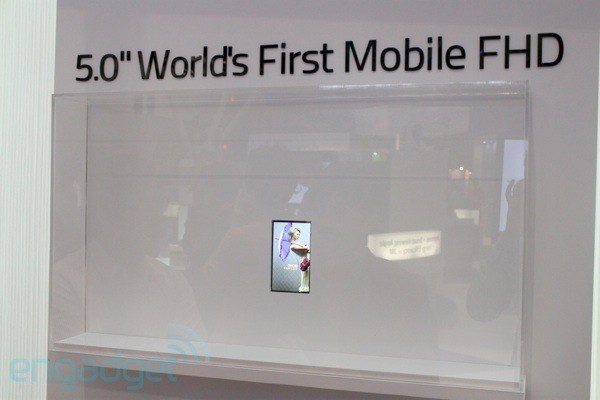