The ongoing law suits between Apple and a number of mobile phone manufacturers have been hitting the headlines for a number of months now, and today it seems that Apple is taking aim at the Samsung Galaxy S3 that could see a delay in its US release.

Consumers in the US are just being made aware of when they can get their hands on the new Android smartphone, but as the Android Community are reporting Apple is making another dubious move against the handset and its manufacturer. The iPhone maker has just filed the same preliminary injunction against the Galaxy S3 as it did against the Nexus a few months ago, and is looking to get the handset banned in the US before it becomes available to consumers.

Apple is trying to use its huge number of patents it has against the competition, and now it is using its ‘universal search technology’ Siri, and using it against Samsung’s S-Voice offering. It is also using the same data tapping type actions that are used on almost every Android device.

Below you can see an image that is from an HTC device used from an earlier filing, and is the same patent that Apple is using against Samsung. Apple describes ‘data tapping’ as a “system and method for performing an action on a structure in computer-generated data”, and is the company’s technology that powers the menu options that are seen in Gmail and in the image below.

With this and the S-Voice feature Apple may have a chance of getting judges to rule in their favour, which would result in a temporary ban on the Galaxy S3. We told you recently how an Apple injunction resulted in the delay of shipments of the HTC One X and the EVO 4G LTE, which was later removed by the US International Trade Commission.

If a judge sides with Apple we could see the much anticipated handset being delayed, which will be frustrating to the millions of consumers looking to pick up the Samsung Galaxy S3. Do you think Apple has a case against Samsung? Update: Apple has failed to get the Galaxy S3 banned so the launch will go ahead as planned in the US. 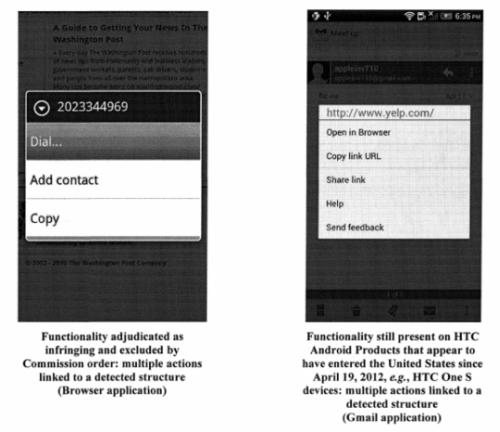 9 thoughts on “Apple takes aim at Galaxy S3 may delay US release: Update”