Samsung Galaxy S3 or HTC One X the superior argument

When it comes to the Samsung Galaxy S3 there are some that would say another smartphone is better, and today the latest news covers a document that compares this handset with the HTC One X. Looks like HTC really wants to grab the attention and point out that its phone is best, but would you agree.

We visited The Next Web and they show a few documents obtained by PriceBaba (A shopping site who we have never heard of), the documents clearly show that the HTC is better than the SGS3 and they want staff to know this. The pamphlet shows specs comparisons of the HTC One X and the Samsung Galaxy S3 side-by-side, and even though they do compare fairly with some biased thinking you can see that they think the One X is more superior to the Galaxy S3.

The Samsung Galaxy S3 on the sheet says: Quad-core 1.4Ghz processor, camera with poor light with f2.6/slower 3fps/20 shots and slower startup at 0.99secs. The sound column has “None” in it, the screen sections for the SGS3 on the sheet says dull bluish and lower density; design is plastic and disappointing design.

On another sheet it says the GS3 is slimmer, has a removable battery, has a SD card slot and comes with a bigger display, but then on the HTC One X side it says that the One X is lighter, feels slimmer and looks way better. The One X battery can last a full day, the HTC one X has a 32GB internal storage plus 25GB of dropbox, also says that it has a total 57GB storage = 30,000 8MP photos or 20,000 songs, which is equal to 41 days of continuous music playback.

After looking at what the pamphlet mentions we have to laugh a little, a removable battery is bad because it needs an external charger to charge with it, we have to point out that what the sheets (shown below) says is a little mad really because having a removable battery means you can change and swap spare ones when it suits you, or buy an extended battery for more battery life, which you cannot use on a fixed battery.

We got to admit that the HTC One X looks stunning, and of course HTC will do everything in their power to sell its smartphone to the masses, always good to give the handset the big hey ho to bring the money and followers in.

So! What will your decision be and why, will you choose the Samsung galaxy S3, or will you pick the HTC One X? Let the superior argument begin in the commenting area below. 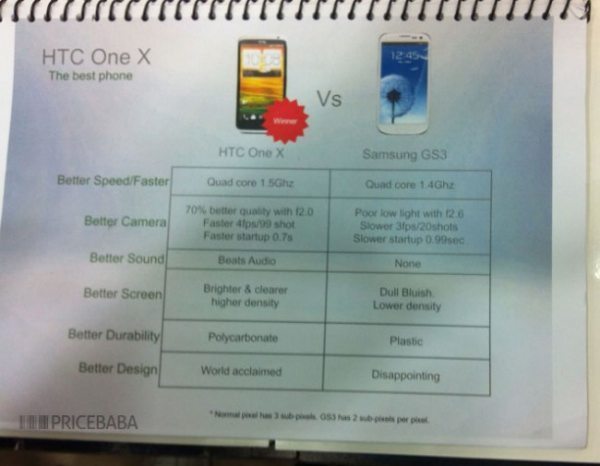 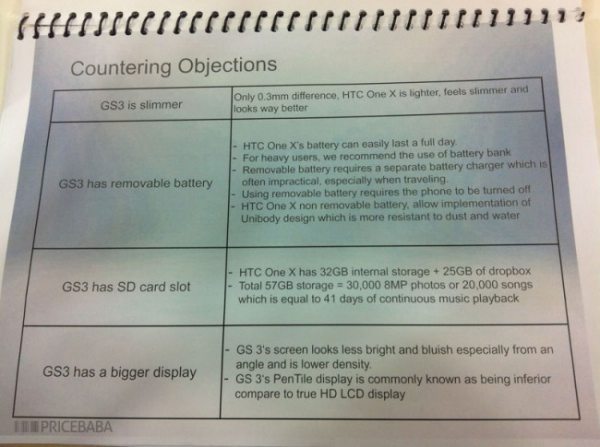