We have some news today regarding Intel’s new all-in-one Ultrabook concept. Although ultrabooks are not something we usually write about at Phones Review this news does tie in with phones as it looks to a time ahead where ultrabooks will be used to wirelessly charge your phone.

As well as the new concept PC featuring inductive charging for a keyboard, Intel has come up with a demonstration video that you can view below this story, showing a wireless smartphone-charging ultrabook. It certainly sounds a good idea to be able to charge a smartphone via an ultrabook and this is something that we can imagine could very well catch on.

The video demo shows a slimline wireless charger that’s thin enough not to bulk up the ultrabook form factory by too much. For the video an Acer Aspire is used and the unobtrusive wireless charger transmitter can simply juice up a compatible phone with a receiver when near enough to the charger. This innovation will include a notification appearing on the laptop’s screen so you know it’s working, together with a ping sound accompaniment.

It’s certainly a clever idea and would help out those of us who constantly carry a phone charger with us ‘just in case.’ However as The Verge points out, it could mean that some users will simply have to swap that for an additional power source for the laptop instead. The video is just over one minute long so check it out below and tell us what you think of this idea.

We think the slim wireless charger shown fits neatly enough to the ultrabook so that it doesn’t spoil its appearance and have no doubt that many people could find this system really convenient. Is this something that you think could be useful for you? Send your comments to let us know. 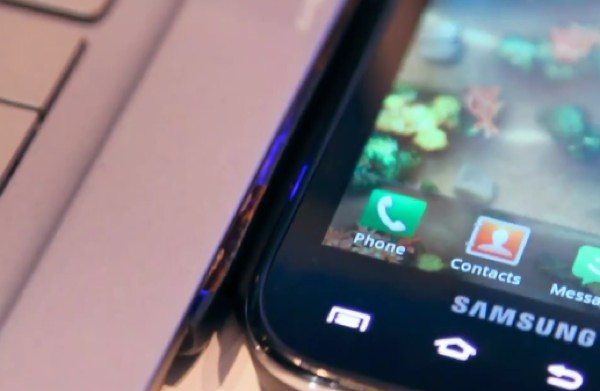