Apple’s WWDC is fast approaching and begins next week on Monday June 11 through June 15 at the Moscone Center, San Francisco. The big keynote speech that everyone is waiting for is on Monday June 11 and we know that many of you won’t want to miss it so we have the worldwide times and dates for you, for wherever you are across the globe.

Plenty of exciting news is expected to be revealed at WWDC 2012, most of it related to iOS 6 and Mac OS X Mountain Lion but we’re also hoping for some product announcements too. Apple CEO Tim Cook will be leading the keynote presentation, which begins at 10am San Francisco time June 11, and we’ve entered the details into a timeanddate.com event announcer to show times and dates for other regions. Please note that the time differences mean that for some places the date of the keynote will actually be on June 12.

The worldwide times and dates can be seen at this link or you can view the image below this story and as you can see 10am San Francisco time equates to 1pm in New York, 6pm in London, 7pm in Paris, Madrid and Johannesburg and 10:30pm in New Delhi. All of these times are for Monday June 11. However in Sydney the time will be 3am on Tuesday, whilst in Tokyo the time is 2am on Tuesday and Beijing and Hong Kong are also on Tuesday at 1am. You can see many more cities across the world listed at the above link.

Hopefully then you’ll have no excuse for missing the keynote speech wherever you are if you hope to follow all the news. There has been a lot of conjecture about whether we’ll be hearing news on the iPhone 5 at WWDC but we’re not yet convinced. We’d like to hear your thoughts on this though.

Are you hoping to hear something about the iPhone 5 or maybe you think it will be a no show at WWDC 2012 and arrive later this year? Send your comments to let us know. 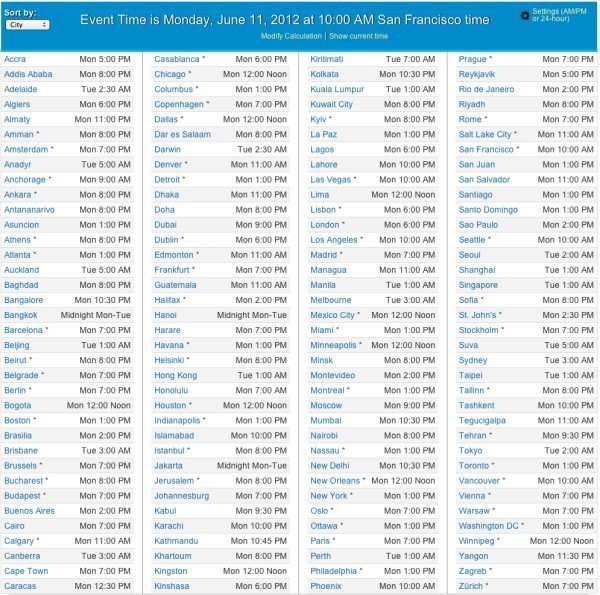