In today’s ever increasing mobile space, the tech guys are always looking at new ways to charge your smartphone, and one such way that could come out to play in the future is a device known as Power Felt. Power Felt is apparently a thermoelectric patch that can be attached to the rear of a smartphone and utilises the body’s natural heat to charge your device.

According to the guys over at Pocket-lint, by way of IQ Intel, Power Felt tech is the project of the director for the Center of Nanotechnology and Molecular Materials, professor David Carroll, who became frustrated with the drainage of his mobile phone battery after long conversations, and apparently turned to his 11-year old daughter for inspiration.

Power Felt is a fabric like material that has carbon nanotubes embedded that are locked up in flexible plastic fibres, and apparently is so flexible you can actually hammer a nail through the Power Felt, and it will still be able to turn heat into an electrical charge.

Although Power felt isn’t actually in mass production yet, Carroll does say that the low cost of manufacturing Power Felt along with the fact that it can be used anywhere, anytime, makes Power Felt a truly viable option for charging a mobile device.

However Carroll did pint out that Power Felt isn’t capable of providing ‘free power for the masses,’ but the material can generate a ‘good deal of power’ when used in large quantities.

Power Felt was recently demonstrated during Intel’s Science and Engineering fair, along with another mobile energy booster from 16-year old Braxton Harris, who created a hiking boot that could charge a smartphone for every 1000 steps taken.

So, would you like to see something like Power Felt come to the mobile space so you can simply charge your smartphone via your body heat? 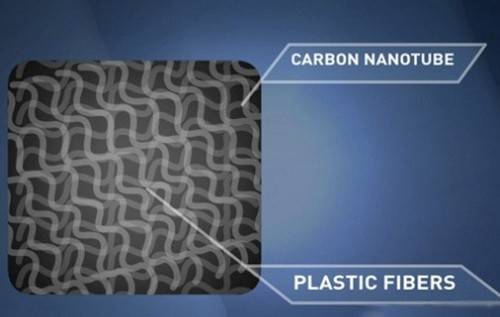