Google Chrome iOS app vs Safari and what they say

Many readers will already know that the Chrome for iOS app became available in the App Store last week and we told how it had quickly become the No. 1 app in the U.S. app store within hours of release. Today we want to take a look at the Google Chrome iOS app vs. Safari and what some of those in the know have to say.

The Chrome app for iOS includes features such as syncing bookmarks and tabs across devices, fast navigation and search, flicking or swiping through apps depending on whether you’re using an iPhone or iPad, and the ability to open and switch between unlimited tabs. The fact that the app has been such a huge hit already is an indicator of how impressive it is, so it will be interesting to see how many iOS users now switch to Chrome and how many stick with Apple’s Safari browser. What are the early verdicts on Chrome iOS vs. Safari then?

Firstly iDownload Blog ran some informal speed tests on Chrome and Safari using an iPhone. They point out that Safari should technically be quicker than Chrome as Chrome doesn’t have access to the Nitro Javascript engine. In their tests (which they admit are totally unscientific) they used the iPhone 4S running iOS 5.1.1 with Chrome for iOS and the iPhone 4 running iOS 6 beta 2 with Safari. It’s a shame that the same set up wasn’t used but nevertheless we thought the results were interesting enough to share. The test shows that Chrome held its own against Safari in day-to-day usage appearing slightly quicker although admittedly this is slightly skewed as you would expect an iPhone 4S running an optimized OS to be quicker anyway. Even if you account for that though then Chrome was still a good match for Safari. You can see a video showing what happened below this story.

iDownload Blog also switched the scenario so that Safari was running on the quicker iPhone 4S with iOS 5.1.1 and Chrome on the iPhone 4 with iOS 6 beta 2. In this case Safari came out top as you’d expect on the faster phone but not by any significant distance and in fact results were pretty close either way. Neither Safari or Chrome then were seen as way ahead of the other but if you’re considering Chrome for iOS then you can use it safe in the knowledge that the speed won’t let you down.

More opinion comes from iMore who took a close look at Google Chrome vs Apple Safari and also conducted its own informal tests running Chrome and Safari and came up with much the same opinion as iDownload Blog. iMore’s tests looked at load time where Chrome was slightly quicker, JavaScript where as expected Safari was ahead and HTML5 and CSS where the results were pretty much a tie. In a BrowserMark test though, Safari was significantly quicker scoring 101631 as opposed to Chrome’s 49248. Ultimately for everyday usage one browser was not significantly above the other as far as speed goes. Then of course it will come down to features of Chrome against Safari, which of course will see more additions once iOS 6 is publicly released.

If you want to see a really in-depth look of Chrome for iOS 6 then you may appreciate the insight from Ars Technica. The review tells how the syncing of tabs with Chrome is a big plus point but points out that because Chrome for iOS is based on the iOS WebKit it doesn’t offer any notable difference in performance. In fact it’s rated here as slower than Safari. This gives a comprehensive look at many of the features of Chrome for iOS and the reviewer finds that, “As a native Safari user, it’s enough to lure me in the direction of Chrome.” However several drawbacks of Chrome or iOS are noted including the performance although Ars Technica notes that “depending on the user, this speed difference may or may not be noticeable.” Another disadvantage was that it’s still not possible to set Chrome as the default browser on the iPhone or iPad.

In case you want to check out Chrome for iOS for yourself then you can download it from iTunes here. Ultimately we’d say that looking at several opinions from those in the know if you want to use Chrome for iOS then it will offer a decent all-round experience and there are no significant advantages for sticking with Safari, except slightly faster speeds in some instances. We’d really like to hear from readers about this though. Are you intending to try out Chrome for iOS and if so what attracts you to it over Safari? Maybe you’re already using the Chrome app on your iOS device now, in which case we’d love to hear your opinions on it. Send us your comments to let us know. 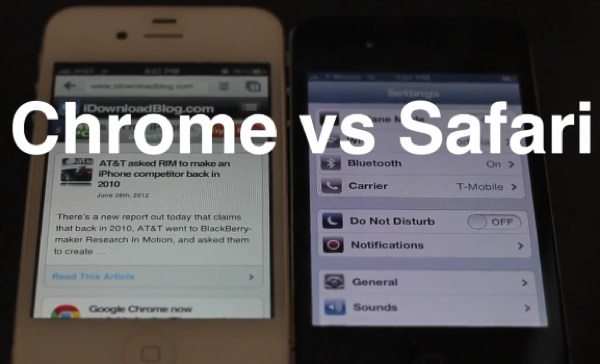