The hype is building for the release of ‘The Dark Knight Rises,’ due out later this month but in the meantime fans of the Batman trilogy might appreciate being able to take a look around Gotham City, courtesy of a Nokia 3D map. It will certainly give Batman enthusiasts something to get their teeth into before the movie first hits screens on July 21.

The Dark Knight Rises is the final part of the trilogy of films directed by Christopher Nolan and as it will conclude the series of movies there seems to be even more interest this time around. Nokia and Warner Bros. had the smart idea of getting together to build the 3D look at Gotham City that is available as a Flash-based mini-site. The maps create an interactive experience for fans who can scrutinize the Batman metropolis and check out locations such as City Hall and Gotham City Stadium.

To access the 3D maps you’ll need to have Flash installed and also a Facebook account, required for you to log in and take a look. You also have to ‘like’ Nokia’s Facebook account but most will feel that’s a small price to pay for viewing the goods. Also Nokia has thrown in a sweetener by incorporating a competition into the map, which will give away prizes of limited edition Nokia Lumia 900 smartphones.

News of the Gotham City 3D Map came to us from The Verge and if you want to check it out then you need to head to this Nokia page, which advises you to keep an eye out for the Bat-shield which may bring hidden surprises. We’d like to know what you think of this The Dark Knight Rises map taster so let us have your comments on it. Are you one of the many people eagerly awaiting the movie launch? 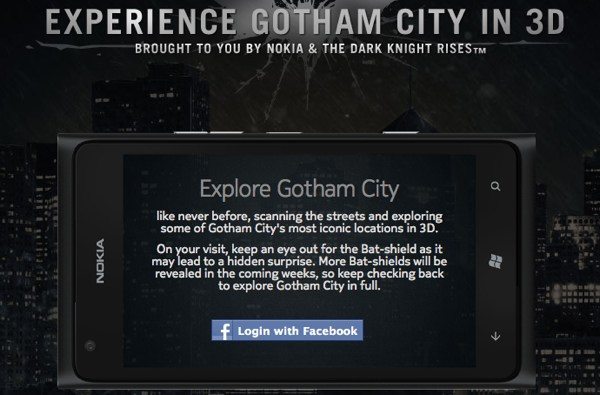