There are plenty of users of iOS devices waiting for iOS 6 to release and we’ve been keeping readers informed about developments. We know the major update will be released to the public in the fall and a few weeks ago told how iOS 6 Beta 2 had been pushed to developers. Today we have news that iOS 6 Beta 3 has now been seeded to developers and we also have some news about AT&T FaceTime over cellular.

The third beta of iOS 6 is now available to developers as an OTA update for devices already running the second beta and will arrive at Apple’s iOS Developer Center. iOS 6 will contain over 200 new features when it makes its public release and just a few of the major changes include Apple Maps, Facebook integration, improvements to Siri, enhanced Mail and Safari and improvements to iCloud such as Shared Photo Streams.

The latest beta contains bug fixes and further improvements and a report on 9to5Mac contains the comprehensive release notes detailing many of the things to look out for. One thing in particular though seems to have come to light from this latest beta and that is that AT&T could be planning to charge for FaceTime over cellular. This is unlikely to be welcomed but there is evidence of it in the form of a screenshot shown on another 9to5Mac report. The screenshot is of a dialog box that has been prompted, which asks the user to contact AT&T to enable the use of FaceTime over cellular. This would seem to indicate that AT&T could be considering charging, as it’s very similar to the prompted message that users receive when they want to enable the iPhone Personal Hotspot.

This is likely to alarm many users especially as AT&T customers are already being charged for data under a separate plan but of course we cannot tell yet whether this will actually appear in the final iOS 6 release. Interestingly iDownload Blog also discusses this possible AT&T move and discusses the huge backlash it could cause the giant carrier if it went ahead with any such plan and we reckon that plenty of AT&T iPhone customers may have something to say about such a move and could even jump ship to another carrier. Of course there’s no way of telling at the moment if other iPhone carriers have plans in this direction but only AT&T shows up in this way in the iOS 6 beta 3.

Another post on iDownload Blog also discusses a video that endorses the likelihood that AT&T is planning FaceTime over Cellular charges and we’ve embedded that video for you below this story. When using an iPhone 4S on AT&T it shows the pop-up dialogue box that appears in iOS 6 beta 3 asking users to contact AT&T when FaceTime over cellular is attempted. When proceeding to the link provided from the dialogue screen it was not possible to go any further with the transaction indicating that the move to charge has not yet been fully established. This would be expected though with the fall release of iOS 6 still being some time away.

The same pop-up message did not appear when iDownload blog tried the same move with an iPad 3 on Verizon, which on its own doesn’t tell us that Verizon isn’t also considering charging. However it certainly does appear that AT&T at least has the strongest intentions to charge for FaceTime over cellular at this point.

We’d certainly like to hear your thoughts on this and reckon it could have some AT&T customers pretty peeved. If you are an AT&T customer and this plan goes ahead would you consider jumping ship to another iPhone carrier? Do you think AT&T would be mad to even contemplate the idea of charging for FaceTime over cellular? Let us know with your comments. 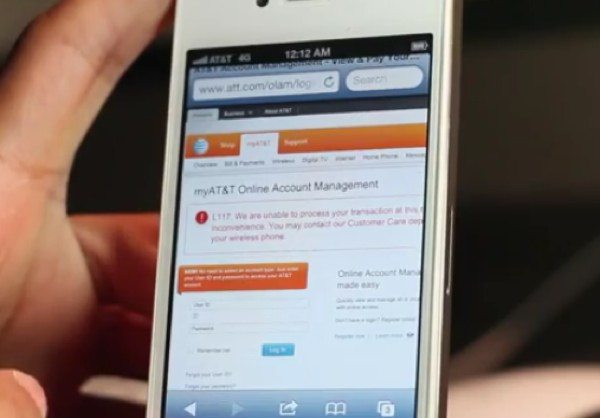