I’m sure most know that over here in the United Kingdom, in the patent infringement battle between Apple and Samsung over Sammy copying the design of the Apple iPad, a UK court came down on Samsung’s side, and ruled that the Samsung didn’t copy the iPad, and as such the judge ordered Apple to post a notice on their website, and in several newspapers and magazines stating that Samsung didn’t copy the iPad.

Well it appears that for now anyway, Apple will not have to post that embarrassing notice, as according to an article over on Apple Insider by way of AllThingsD, Apple has been granted a temporary stay on issuing that notice.

Originally Judge Briss stated that Apple would have to provide a link to the judge’s order on the front page of Apple’s European sites that should remain in place for a year, along with issuing a similar notice in the Guardian, Daily Mail, Financial Times, T3 and Mobile Magazine on a page before page six and in a font no smaller than Arial 14.

However Apple’s lawyer claimed that posting the notices would amount to advertising a competitor’s product, as the firm is required to purchase advertising space in the newspapers.

As a result, a London court had now granted a request by Apple to postpone the order until October, when Apple will have to opportunity to appeal against the ruling. So there you have it, for now anyway Apple wont have to post the rather embarrassing ‘Samsung didn’t copy the iPad‘ notice.

Do our readers think that the judge’s ruling that Apple should post a notice stating Samsung didn’t copy them is deserved and fair? 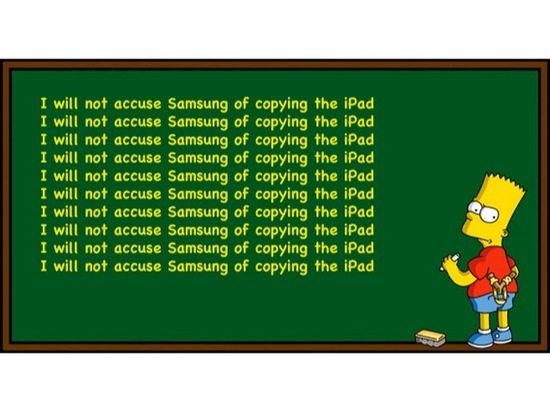