The London 2012 Olympics is about to kick off later tonight with the official opening ceremony where a billion people are tipped to be watching the action take place, and in the meantime Samsung reveals some Galaxy S3 Team GB limited edition handsets.

According to the Android Authority the company has unveiled two special edition Galaxy S3 smartphones, which will be available for sale in the UK soon and targets tech fans that want to show their support for their sporting heroes, or want a handset a little different.

The Olympics will be taking place across venues around the country for the next seventeen days, and while the two special edition versions of the Galaxy S3 may not be available until August 1st, there is a good chance they will sell really well in the coming weeks.

These special Galaxy S3’s look similar to some Olympic branded Samsung Galaxy Notes released a while back, and have the same hardware specifications as the normal versions of the S3. There is the Pebble Blue version that can be seen above that has the Union Jack on the rear of the device, or there is the Marble White version that has the gorgeous Team GB lion on it that can be seen below.

Buyers of the special editions will be offered both the regular Galaxy S3 cover and a Team GB one, so you have the chance of deciding how long you want to show support for the countries athletes. The handsets are available on Orange, Three, O2, Talk Mobile, T-Mobile, and Vodafone. They are also available free with a new two year contract starting at Â£28 per month.

There will be more information released on specific plans and network offers on August 1st when they become available from Carphone Warehouse, both online and in brick and mortar stores across the country.

Do you like the look of the special edition Samsung Galaxy S3? 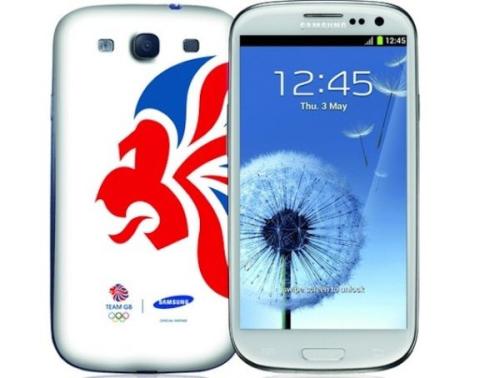