If you happen to be over in the good old US of A, and in the market for an Android smartphone, and have had your eye on the Samsung Galaxy Nexus, but have been putting off purchasing the handset, now could be the ideal time to grab the Galaxy Nexus, as word is if you hit up Best Buy you can get the device for zero bucks.

According to the guys over at Phone Arena, the Verizon Samsung Galaxy Nexus has now hit the free zone on Best Buy, where you can grab the Android handset for no cash outlay when signing up for the usual two-year agreement with the Big Red, but this free deal only runs until the 25th of next month.

I’m sure you will be aware that the Samsung Galaxy Nexus was the first device to get officially updated to Android Jelly Bean, and sports a 4.65-inch Super AMOLED touch screen along with a 1.2GHz dual core processor, a 5 megapixel rear facing auto-focus camera with LED flash, a 1.3 megapixel front facing camera, and plays nice on the Big Red 4G LTE network.

According to the Phone Arena guys, the boxes of the Verzion Galaxy Nexus are stamped with ‘updated’, which the guys suggest could mean the handset has been made future-proof against any lawsuits by rival Apple, or it could also mean that the Verizon Samsung Galaxy Nexus comes preloaded with Android Jelly Bean.

Anyway, as it stands, there is no better price than free, right? So if you have been contemplating picking up the Galaxy Nexus on Verizon, now would be a good time to grab the device by hitting up Best Buy. 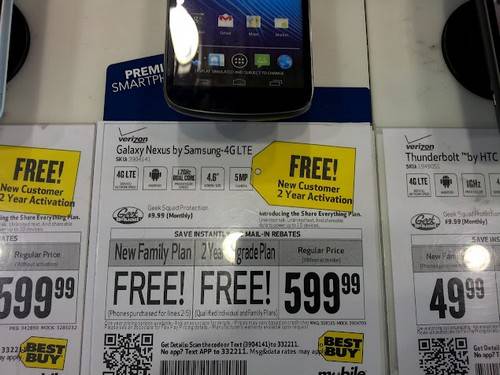