If you happen to be a Windows Phone fan, you might like to know that old Samsung as a couple of new smartphones in the pipeline codenamed Odyssey and Marco and are both smartphones that will run the Windows Phone 8 operating system, and a few details on these new WP8 devices have now hit the net waves.

According to a report over on Slash Gear by way of The Verge, it appears old Samsung outed the details on the two Windows Phone 8 devices themselves in a roadmap that was filed in the ongoing Samsung and Apple legal fight.

So what can the mobile space expect from these two Sammy Windows Phone 8 handsets? Well apparently the Samsung Odyssey will sport a 4.65-inch HD Super AMOLED touch screen along with HSPA+ 21Mbps and LTE, an 8 megapixel rear facing camera, and NFC, and is being touted as an ‘iconic smartphone.’

Both smartphones will sport the 1.5GHz Snapdragon MSM8960 dual core processor, that has been used to test the Windows Phone 8 operating system.

As for just when the mobile space is likely to see the Samsung Odyssey and Samsung Marco come out to play, well if the docs are actually up to date we can expect to see these devices hit sometime in Q4 of 2012. 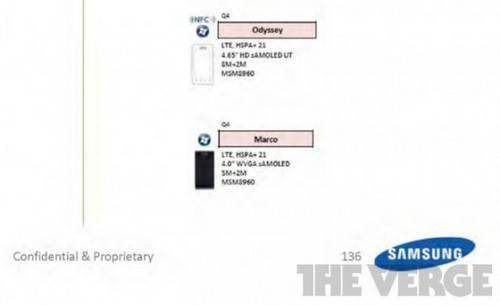