For those over in the USA who prefer the Sprint network as their favoured carrier, if you are in the market for an Android Ice Cream Sandwich smartphone, and don’t mind holding off until October, you might like to consider a new handset that is coming to Sprint, the ZTE Flash.

According to an article over on GSM Arena, the guys over at Talk Android have come across a leaked Sprint promo that shows the ZTE Flash handset as becoming available as of the 14th of October, although there is no word on what the handset will cost at the moment.

Although the ZTE Flash for Sprint hasn’t been officially announced, the promo does indeed show that October 14 availability date, and according to the Talk Android guys,as the sheet was printed before Google unveiled Android Jelly Bean, there is always a possibility that the ZTE Flash could arrive sporting Jelly Bean rather than ICS, as ZTE has already delivered Jelly Bean on the ZTE N880e.

Does the ZTE Flash seem like an Android smartphone on Sprint you wouldn’t mind owning? 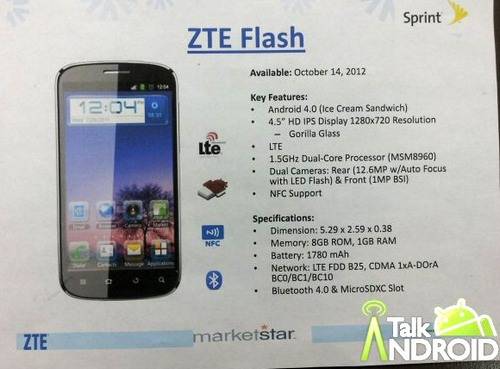