As you are probably aware, HP didn’t fair too well in the tablet space when they dished out the webOS HP Touchpad, and ended up offering the slate at a cut price just to get rid of them. However it appears that HP is about to get back into the tablet game with a new HP slate that is iPad-like, and the unannounced HP tablet has made a sneaky appearance in a video.

Of course we have that video for our readers viewing consideration below, courtesy of Pocket-lint, who say that although viewers don’t actually see the front of the iPad looking tablet, but with a black bar, along with HP logo, it is very different from the HP TouchPad, and looks to be a 10-inch device.

The video was posted by HP a few days ago, and whilst the voice over delivers his inspirational words you get to see two guys using the new HP slate on two separate occasions.

It could simply be a mock up tablet of course, but the new HP tablet could be a Windows 8 slate, as the company is expected to release a Windows 8 tablet later in the year in conjunction with when Microsoft launched Windows 8 on October the 26th.

Obviously there is no confirmation that this tablet will be the new HP Windows 8 tablet, but apparently the guys have contacted HP for clarification.

Anyway, head on down and mash that play button to check out what could be a new Windows 8 tablet from HP. 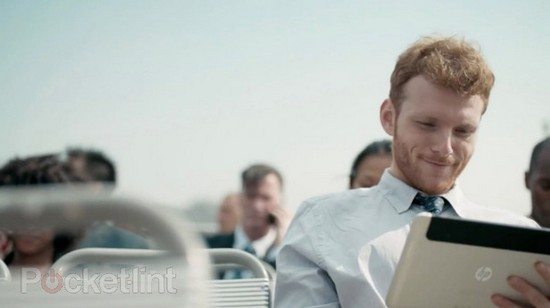 One thought on “New HP iPad-like slate spotted in video”