Strategy Analytics’ research published by Wireless Smartphone Strategies aka WWS service shows that smartphone shipments has fallen by 5-percent each year to reach 24-million units in the United States during Q2 2012. The iOS and Android operating system are the most popular on the market, and the report shows that Android has lost ground to Apple’s iOS, leaving Androids market share falling by four points on an annual basis to 56 percent.

When you look at the volume in USA Android still remains the number one platform, but looking further into the report the Android market share is at its peak for now as iOS gains ground. This results in Apple’s US market share hitting a rise of ten points from 23-percent to 33-percent (in Q2 2011 to Q2 2012 respective). BlackBerry by RIM has dropped 11 percent to 7 percent over the same year and this is understandable considering there has been no decent BlackBerry smartphone releases and the lack of its new BB10 operating system does not put them in favour.

Looking at the above figures surely the iPhone 5 is to further decline the Android smartphone market share, if we look at the news we reported yesterday that Apple is going to have a special event where they will be revealing the new iPhone 5 on Wednesday, September 12, 2012 this will surely have an affect on the Android corner.

Apparently the iPhone 5 will be released on Friday, September 21st. If reports are correct customers may also see an Apple Mini iPad release too, time will tell. The iPhone 5 release in our eyes will be one of the best selling smartphones in history, we are not just saying this to be vindictive in any way, we are clearly pointing out that when Apple releases an iPhone sales and shipments goes through the roof. The Samsung Galaxy S3 is doing very well at the moment and we thought that the Android market share would have risen over the last year not dropped, hopefully this is not the case of Android reaching its peak this year as we love healthy competition. 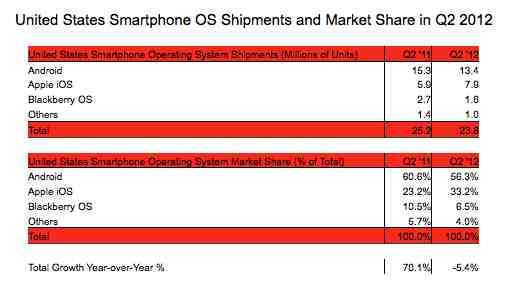