Samsung is currently enjoying huge sales of its flagship Galaxy S3 handset and the manufacturer has now released details of the Dual SIM Samsung Galaxy S Duos S7562, which looks remarkably similar to its bigger brother.

As The Droid Guy is reporting the company has a history of releasing lower end smartphones that look similar to its flagship device. Previously with the original Galaxy S Samsung launched a number of cheaper handsets that closely resembled it, and is great for consumers that don’t want to pay out money for extra features they are never going to use.

Dual SIM handsets are extremely popular in developing countries as they let owners use two SIM cards at a time, which allows them to use multiple prepaid networks on a single phone. Most of this market is dominated by cheap handsets made in China, but companies such as Nokia and Samsung are focusing on making an impression with these types of devices.

The Samsung Galaxy S Duos S7562 comes with a 4-inch display with a resolution of 800 x 480 that results in a pixel density of 233 PPI, which is powered a Cortex A5 processor clocked at 1GHz and is based on ARMv7 architecture. This means that the handset will support the Google Chrome browser, and graphics wise there is an Adreno 200 GPU.

Camera wise there is a five megapixel unit on the back while around the front is a VGA shooter for video calling, and other features include 4GB of on board storage that can be expanded by microSD card, and 512MB of RAM. Another nice feature will be the Android Ice Cream Sandwich operating system straight from the box, but it is not currently known if the device will eventually be upgraded to Jelly Bean.

There is 3G connectivity but only on the primary Sim and there is also Wi-Fi, Wi-Fi hotspot along with Bluetooth 3.0 connectivity. Both of the SIM card slots are GSM and the unique feature of the handset is that it can forward a call from one SIM to the other one that the is being used, and is being called by Samsung as ‘Dual SIM always on’.

It is thought that the device will be releasing in India by the end of the Summer and could be priced somewhere in the Rs 15,000 price range according to Techtree, but availability elsewhere is not currently known. Would you like to own a Dual SIM smartphone? 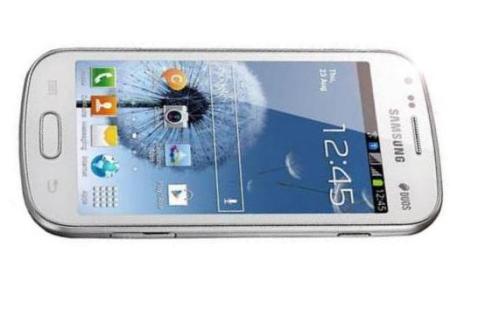