We’ve been bringing you all the rumors and developments about a smaller Apple iPad for such time. The speculation about an iPad mini is nothing new but it does look as though this alternative-sized iPad may soon become reality as evidence towards it mounts. Recently there was news of photos of a purported iPad mini and we then heard of a possible release date in September at the same time as the iPhone 5. Now a new iPad mini gallery has come to light that is pretty intriguing.

We shouldn’t be surprised that it looks like all systems go for a smaller iPad. Yesterday we told of the popularity of the new 7-inch Google Nexus 7 Android tablet and Apple certainly knows now that there’s a demand for a smaller tablet. The likelihood is that many Apple enthusiasts and others would love to have a scaled-down, 7-inch cheaper version of the standard iPad, which has a 9.7-inch display. This smaller iPad mini is rumored to have a display resolution of 1024 x 768, 16GB of internal storage and a price of around $299, rather than $499 for the latest cheapest version of the iPad.

The new gallery of iPad mini photos, mockups and representations has been put together by 9to5Mac who also received a number or purported back plates for the iPad mini. We’ve shown you just a couple of the photos here but head to the link above to see more. It seems that the latest theory is that the iPad mini will closely resemble a large iPod touch and BGR cites various sources “that we have reason to believe hold knowledge about Apple’s plans,” for this information. The sources also say that the iPad mini is likely to have smaller bezels along the side with separate volume buttons as well as a mic on the reverse.

Other suggestions from 9to5Mac include a front camera for video conferencing and some of the iPad mini shells shown suggest both back and front cameras though of course nothing is confirmed. The iPad mini could also feature LTE connectivity and a launch around the end of September does makes perfect sense ahead of the busy holiday season. Indeed 9to5Mac goes as far as saying that if Apple could only bring the iPad mini price in at around $200 then it could be the “biggest product launch in Apple’s history.” 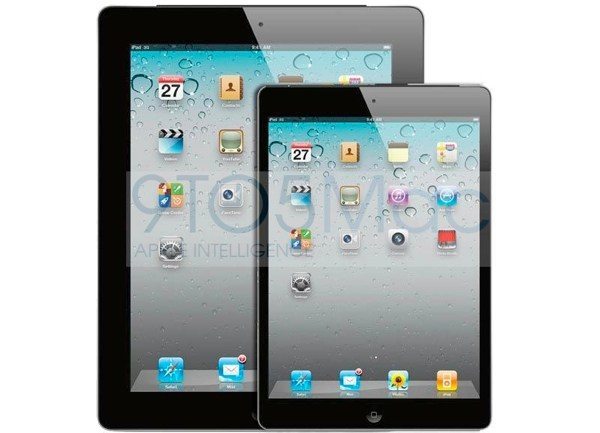 In a follow-up article 9to5Mac also tells how a pair of iPad mini schematics that they published in July completely fit with the latest information from sources about a smaller bezel along the sides and these drawings also showed a slim design with front and rear-facing cameras and the smaller dock connector that has been highly rumored for the iPhone 5. It’s all rather intriguing stuff and interesting to try to unravel all the photos and mockups into those that may be accurate and those that are rather more unlikely.

We’d be interested to hearing your thoughts on an iPad mini, especially as it now seems more plausible than ever that it is in fact on the way. Would you be interested in purchasing a smaller iPad at the right price? Do you think the Google Nexus 7 has already wrapped up a large part of the market for those wanting a smaller tablet or do you think the Apple name and iOS will give the iPad mini a compelling appeal? Let us know with your comments.