Apple vs Illustrator vs Photoshop with iOS & Mac patent

Looks like there could be a possibility that Apple is looking at delivering a new advanced graphics app for iOS devices and Mac that could grab a piece of the Adobe Photoshop and Illustrator market, as a new patent filing over at the USPTO has now been published, with the invention using extensive use of gestures to interact with the UI, tools, and on screen objects along with the ability to alter any input tool property in response to and input gesture.

The news of this latest patent filing comes our way courtesy of iDownload Blog and by way of Patently Apple, and apparently the new digital illustrating and photo manipulation software uses both touch and mouse input, which suggest the solution will be used on both Mac and iOS devices.

Apparently Apple does go deep in their description of the programs with both apps delivering easy adjustment of tools along with immediate visual feedback on those adjustments, whilst a dynamic interface featuring visual feedback would enable a better user experience…here’s what the filing has to say…

‘For example, rather than having to select options on a displayed menu, a user may provide input gestures at or near a displayed input tool to directly manipulate one or more properties of that input tool, such as its size or color. By visually changing how an input tool is represented on a user workspace so as to indicate a change in an input tool property, a user may be provided with a more efficient and intuitive user interface for generating graphical objects.’ 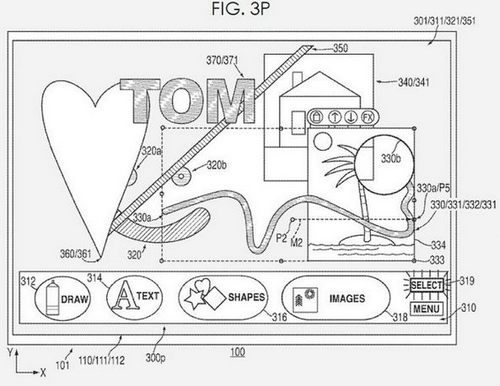 Furthermore, in another filing, there is a description for a new type of layering system that is normally seen in such image editing apps as Pixelmator and Photoshop, which basically means layers would be intelligently selected thus taking out the hassle of the user having to select a preferred layer from the list.

Anyway it all gets somewhat technical, so for those that are into patents and stuff and would like to find out more, you can check out everything by hitting up Patently Apple, but one must remember of course not all patents actually make it to reality even with Apple.