Since the launch of Android 4.1 Jelly Bean we’ve been trying to keep readers up-to-date on which devices may receive the update and when. The Google Nexus 7 tablet manufactured by Asus was launched running Jelly Bean and since then the Jelly Bean update has also begun rolling out to the Samsung Galaxy Nexus and Nexus S plus the Motorola Xoom tablet. Now Asus has fulfilled its promise to get Jelly Bean to its Asus Transformer Pad TF300 as we hear news that the rollout has started today.

Only yesterday we gave readers a roundup of Jelly Bean update news for various manufacturers and noted that Asus had pledged the update will come soon to the Transformer Pad, Transformer Pad Prime and Transformer Pad Infinity. Now, for one of those at least, Jelly Bean has arrived, with reports that some people have started to receive 4.1.1 Jelly Bean earlier today. It seems though that this is only an over-the-air update at present but of course that could change so you may want to keep checking.

Android Central reports of the Jelly Bean update rolling out to some of its readers and a look at the Android Central Forums shows some comments on this with one reader making the point that the update warns the user that it won’t work with Flash or Wi-Fi Direct, although that may not be a big deal for some people. It’s certainly good to hear that Asus is maintaining its endeavors in being one of the first manufacturers to get the latest Android update to its users. 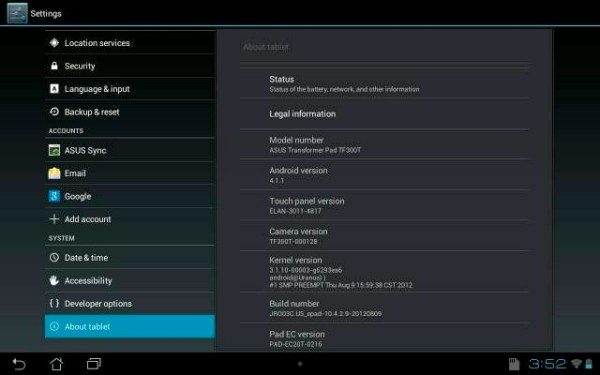 We’d be interested to hear from readers waiting for the Jelly Bean update for their Asus Transformer Pad. Have you already received the update and if so did it all go smoothly? What are your first impressions of Jelly Bean? Maybe you’re still waiting patiently (or not) for the update to rollout to you? Let us know with your comments.