If your favoured carrier happened to be T-Mobile, the likelihood of you being able to purchase the new iPhone from the carrier isn’t looking good, something that shouldn’t really surprise any of the iOS faithful, especially when it appears T-Mobile is gearing us to selling against the iPhone, which should point towards the carrier not getting the iPhone 5.

According to the guys over at Tmonews, they have received a couple of T-Mobile memos, one that show that the carrier is preparing to train staff on just how to ‘sell against the iPhone’ as of the 21st of next month, which is rumoured to be the same date the iPhone 5 will become available.

The guys suggest that as T-Mobile employees are being trained to combat the iPhone, this would suggest that T-Mobile will probably not be seeing the iPhone 5, because they can’t envision a scenario where T-Mobile would train their staff to sell against a handset they would be getting. 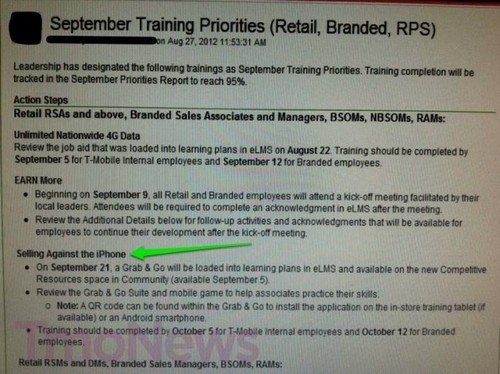 And that’s your lot on this little matter, a couple of pieces of information that is basically minor in the big scale of things, but apparently do match up with other stuff that is doing the rounds concerned with T-Mobile’s network refarm, but if you were hoping that T-Mobile would be offering the new iPhone, it looks like your hopes have been well and truly dashed.