We first reported on a new Motorola smartphone destined for the Big Red known as the Motorola XT907 sometime back, and it appears that the device will now be known on Verizon as the Motorola Droid RAZR M 4G LTE, and now images of the Android smartphone, along with full specifications of the device have surface.

The guys over at Engadget managed to get hold of the images and specs for the Motorola XT907, now known as the Motorola Droid RAZR M 4G LTE, which shows that the Android smartphone will sport a 4.3-inch qHD Super AMOLED Advanced touch screen with Gorilla Glass 2, which the guys say will probably be the same ColorBoost display seen on the Motorola Photon Q for Sprint. 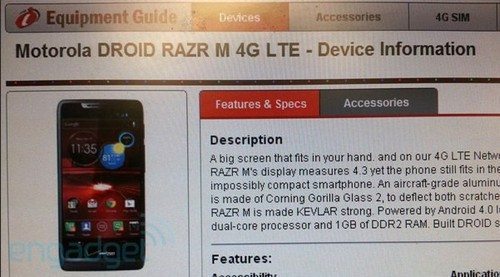 And that’s about all the info available on the Droid RAZR M 4G LTE handset, but no doubt more will be known such as possible release date and pricing, along with hands-on videos becoming available when Motorola holds their event on the 5th of next month, and when it does, we will of course pass it along.