The September 12 event where everybody expects to see the unveiling of the Apple iPhone 5 is not too long to wait now and as we get closer more and more revelations and leaks are coming to the surface. This long-awaited upgrade has many people waiting in anticipation and in further news a video has appeared purporting to show brand-new redesigned headphones for the iPhone 5.

The iPhone 5 is set to be a huge hit and we’ve all been wondering what the upgrade will bring. Many rumors have come out about specs and features and expectations include a possible A6 quad-core processor, LTE connectivity, a larger display, improved camera, iOS 6, a new smaller dock connector and much more. Up until now we haven’t seen much mention of new headphones so if this news is accurate then we think it will please plenty of potential iPhone 5 customers.

Unfortunately the YouTube video has now been marked as ‘private’ and so we cannot bring it to you here but it was showing on MacRumors before it was pulled and they have a handy translation and some photos too. The video and photos were originally posted by a Vietnamese website Tinhte.vn and you can see an even larger array of images on that site at the above link and we’ve posted a couple for you here. Obviously we have no way of verifying just yet that these are the new headphones for the iPhone 5 but Tinhte.vn has previously leaked Apple product information and has been reliable before.

The headphones shown are apparently made in a Foxconn plant in Vietnam and this can be seen in a photo of the cable along with the words ‘Designed by Apple in California.’ Tinhte.vn certainly seems persuaded by the authenticity of the headphones stating that they are for the iPhone 5 and will replace the headphones currently being used. Instead of being like earbuds these new headphones resemble “a horse’s head,” and appear smaller when being worn. They also appear to be made from one integrated piece and the site claims, “they do not hurt the way earbuds do.” The quality of the design and all of the materials involved also lend to the fact that these could be authentic iPhone 5 headphones. 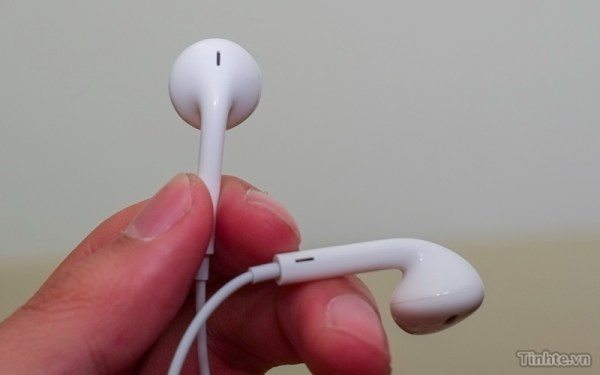 It also seems as though these new and improved in-ear headphones will be supplied with the iPhone 5 and not as an added alternative to the usual headphones as reported by Apple Insider. The site also notes that these new headphones look as though they feature two ports behind the mesh grate, indication that a dual-driver balanced armature system could be being used as used in other ‘after-market’ higher-end Apple headphones. However a question mark over this is thrown up by the fact that slits seen on the back and on the bottom of the stem don’t tie in with this type of system. It’s also noted that while it’s not possible to come to any conclusion from the images and video, it is a possibility that the microphones are within the headset, as an inline microphone cannot be seen.

All rather intriguing and we wish we could take a look at the original video to form our own opinion but for now this is the best we can offer our readers. We’d certainly be interested to know what you think about these new in-ear headphones coming to the iPhone 5? Would you welcome a new set up and think anything would be an improvement on what is currently offered? Maybe other things are far more important to you about the iPhone 5 than the headphones? Why not send us your comments on this.