The tablet PC market is growing all the time and one area that is seeing stronger growth is the more affordable sector, which was kicked off by the original Kindle Fire and was joined more recently by the Google Nexus 7. Following weeks of speculation regarding a refresh Amazon has now revealed the Kindle Fire HD, which takes aim at its rivals in two screen sizes.

The team over at SlashGear are reporting that the online retailer has revealed a new set of Kindle Fire devices, which take the original and make it high definition. There will be two sizes on offer with a 7-inch display, and one with an 8.9-inch display. The larger of the two devices has a lovely 1920 x 1200 pixel resolution using IPS LCD display technology providing 254PPI.

These new devices work with no air gap between the glass on the front and the display, which means users are treated to clearer images with less glare. Powering the units is an OMAP 4 4470 dual core processor provided by Texas Instruments, and is claimed by Amazon to be better than Nvidia’s Tegra 3 processor.

Amazon’s new tablets feature dual stereo speakers instead of the single speaker setup found on many rival tablets, and the units also have Dolby Digital Plus audio that is exclusive to the Kindle Fire HD range. 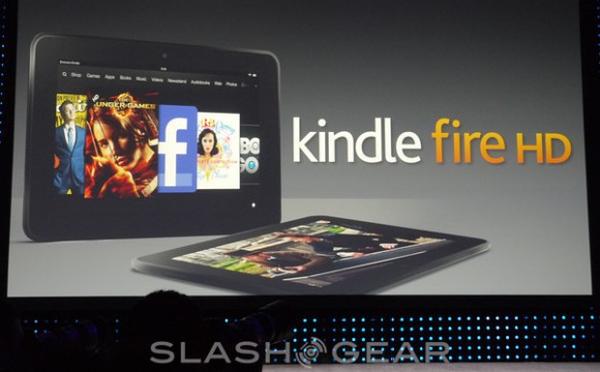 Other features include a set of antennas that include dual band 2.4GHz and 5.0GHz for faster Wi-Fi connection, and MIMO technology that is only found in a small number of higher end devices. The latest version of the iPad only features one antenna, as does the Google Nexus 7 according to Amazon.

The retailer is claiming the devices have the fastest Wi-Fi currently available, and it has also doubled the RAM from previous models along with increasing the battery life. Amazon has also decided to refresh the original model with a faster processor and more RAM, which provides a faster performance with a new price of $159.