If you are one of the Android faithful out there, then no doubt your are hoping at some point in the game your smartphone will see an update to the latest Android operating system, Android 4.1 Jelly Bean, but as you know, Jelly Bean hasn’t been available all that long so is shouldn’t surprise anyone that Jelly Bean distribution is currently only at 1.2 percent.

As you can see by the pie charge, Gingerbread still commands in the Android space with some 57.2 percent still running the OS, whilst Android Ice Cream Sandwich is at 20.8 percent distribution, while 14 percent of Android handset still run Android 2.2 Froyo, 3.7 percent run Android 2.1 Eclair, 0.4 percent are now on Android 1.6 Donut, and 0.2 percent are still using Android 1.5 Cupcake. 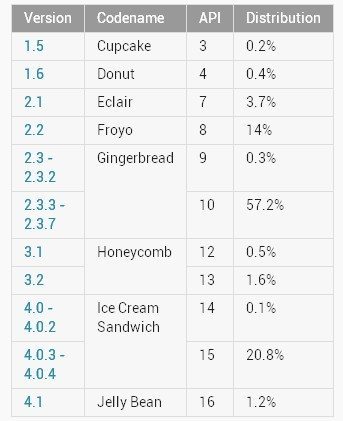 The image below shows a history of the relative number of Android devices that run differing versions of the Android platform again collected in the same time period, with stacked platform versions with the oldest version at the top, and shows the total percentage of active devices that are compatible with a given version of the OS. You can check out app the Android stats by hitting up the Android developers website.

Thus it would appear that although Android Jelly Bean is out there, there is still a long way to go before Jelly Bean becomes the dominant Android OS, but given time no doubt Jelly Bean will become available on more and more devices considering the amount of manufactures who have said their devices will be updated with the new operating system.

We’d like our readers that own an Android smartphone to let us know which Android OS they are currently running, and are you hoping to to gain Jelly Bean in the future, so feel free to let us know by posting to our comments area below.