As you may well be aware by now Apple will be showcasing the latest iPhone in only two days time, and while most of the focus will be on the new hardware being made available some users will be looking at the newest version of Apple’s mobile operating system. Before the special press event gets underway on the 12th of September we have an iOS 6 release date prediction calendar for you.

As it is being reported by the team over at Product Reviews the release for iOS 6 could only be predicted once we knew the date for Apple’s iPhone 5 keynote speech. While the company hasn’t revealed the exact details about the press event, we have already seen some subtle clues in the banners being put up at the venue, and in the actual press invites that were sent out.

Looking back at last year’s event that took place on October 4th, iOS 5 was made available only eight days later on October 12th. Using this as an example the website has created the image that can be seen below showing an iOS 6 release window, which puts it between the 16th and 20th of September, but going on Apple’s previous history it is thought the update will be made available in the middle of the week so will mean the 19th. 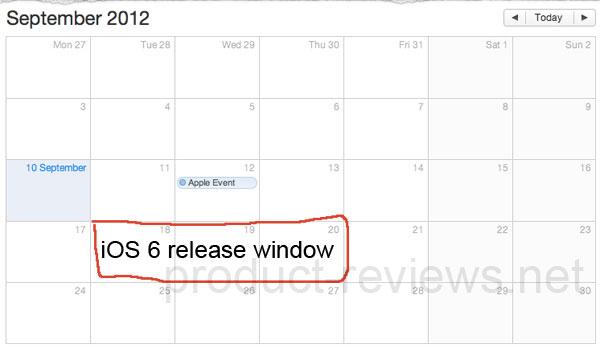 It has to be remembered though once the software has been released by Apple there is no guarantee all users will be able to download it straight away. As there will be such a high demand for the upgrade it may be difficult at first to download iOS 6, which will depend on the time of day you attempt updating the software.

Despite the wealth and size of Apple servers can only handle a certain amount of traffic at once. As it has been suggested before the iPhone 5 is thought to be made available by September 21st, and these devices will obviously come with iOS 6 already installed.

This will mean just like previous years Apple would want to have iOS 6 made available about two days earlier, which gives the company time to deal with any issues that may arise with the software. Previously we told you of a video showing how users can get to use iOS 6 without developer accounts, but there doesn’t seem much point considering how close the official release of the software is.