Two new flagship devices have recently been announced in the mobile space, Samsung announcing the Samsung Galaxy Note 2 and rival LG announcing the LG Optimus G, both Android quad core devices, but how do these two new flagship handsets stack up against each other, and which device can come out the winner?

Well the folks over at GSM Insider decided to compare the specifications of the Samsung Galaxy Note 2 against the LG Optimus G to see if one can best the other, albeit the Note 2 being a phablet whilst the Optimus G is a smartphone, but let’s take a look at the spec differences anyway. 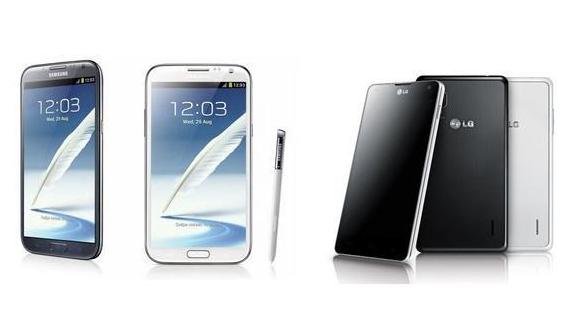 The guys give a win to LG when it comes to the display, as the Galaxy Note 2 sports a 5.5-inch Super AMOLED HD display whilst the Optimus G sports a 4.7-inch in-cell touch HD ISP LCD. On the camera front the LG Optimus G is a clear winner due to sporting a 13 megapixel rear facing camera along with a 1.3 megapixel front facing snapper, while the Galaxy Note 2 has an 8 megapixel rear facing snapper and a 1.9 megapixel front facing camera.

On the subject of the camera, originally the Galaxy Note 2 was rumoured to sport a 13 megapixel camera, however that didn’t become a reality, and the reason Samsung forwent the 13 megapixel camera according to Eastern Morning Herald, was because LG used up most of the high end 13 megapixel sensors for the Optimus G as Sony had allocated most of the sensors to LG and as such couldn’t meet Samsung’s requirements.

Although when it comes to the battery, the Samsung Galaxy Note 2 wins hands down with a 3100mAh battery while the LG Optimus G offers a 2100mAh battery.

In conclusion the guys believe that when it comes to performance the LG Optimus G is better then the Galaxy Note 2 due to the processor being more powerful, and also packing that 13 megapixel camera, but the Samsung Galaxy Note 2 fairs better with Android Jelly Bean, and offer better battery life.

Having said all this, it really is down to personal preference on whether you prefer LG devices or Samsung devices, whether the camera makes much difference to you, and of course whether you want a phablet or smartphone, so basically it’s really down to the customer to decide which of these is the better device.

So which of these two Android devices do our readers believe is the better device?