According to Sony Mobile, this new sensor tech on the Sony Xperia V means there are less physical layers in the touch panel, because the sensor layer is actually part of the lens itself, and thus makes for better image quality with no interference from the touch sensor component.

So with the Sony Xperia V, when compared to conventional touch panels, the Android smartphone has one less layer of glass along with one less layer of glue, so typically the user will get less haze and roughly five percent better display luminance because of losing those layers. 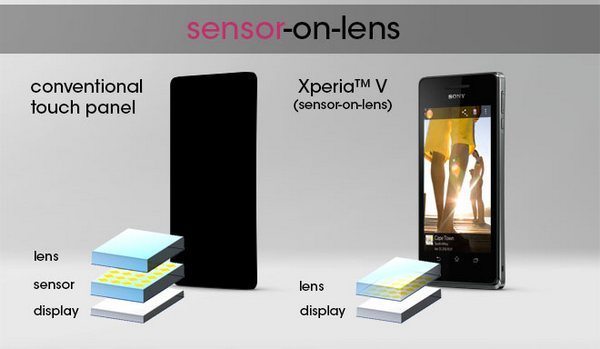 Of course using sensor-on-lens technology also means the Xperia V is thinner and lighter, and the new sensor tech also moves the image plane closer to the user, which the guys say, makes it feel as if you are actually touching the image itself.

Apparently with the ‘direct touch experience’ the user gets less parallax problems compared to a conventional touch panel due to the point of touch and image being closer together in the sensor-on-lens touch screen tech.

So there you have it, just a little bit of information as to why the Sony Xperia V is thinner and lighter and delivers better image quality. Any of our Android faithful readers going to be snapping up the Sony Xperia V?