Smartphones now offer consumers another way to do all their online banking, shopping or other pastimes that require us to store delicate information in our handsets. This gives us the added problem of identity theft and other online fraud if the device falls into the wrong hands, and manufactures are offering new ways to protect our smartphones. Now we have the KKDI palm unlock Android app for you running on the HTC One J in a video.

When it comes to data security protecting information via passwords can be seen as prehistoric, and things such as facial recognition and other biometric security is not completely fool proof. Now the team over at Engadget while at CEATEC in Japan have spent some time with another security solution.

KDDI has revealed a new palm authentication application for the Android platform, which works with the high resolution cameras now found on some handsets. The app scans a users palm in tandem with the handsets flash, and it was seen running on a HTC One J.

Once set up on the device by placing your hand so it fits in between the red markers, the handset will soon be ready to work with your hands. Once the smartphone is locked and as soon as an attempt is made to unlock it again, an authentication screen is opened where you will need to your palm to unlock the device. 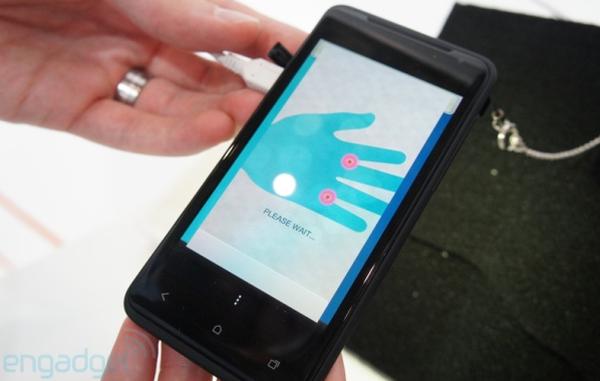 It would still be quicker to unlock the device with the standard PIN code, but would obviously offer a higher level of security. The application is set to hit Google Play at any time where it will be available on a free trial, but in the meantime check out the video below of the app in action.

Would you any such app on your device?