If you like rugged smartphone, and are in the market over in the US of A for a new rugged Android smartphone on the AT&T network, and perhaps considering picking up the Samsung Galaxy Rugby Pro once the device becomes available, perhaps a hands on video with the Android handset might go some way to helping you make up your mind.

As such we have a hands on with the Samsung Galaxy Rugby Pro for AT&T for your viewing consideration below courtesy of Engadget who managed to get a little playtime with the updated version of the Rugby Smart handset,and is about the same design but with a chunky slab of plastic and rubber.

The Samsung Galaxy Rugby Pro for AT&T sports a 4-inch WVGA Super AMOLED touch screen along with a 1.5GHz processor, although only 768MB of RAM and 8GB internal storage, but there is microSD expansion, along with a 5 megapixel rear facing snapper and a front facing camera, and the device does run Android Ice Cream Sandwich. 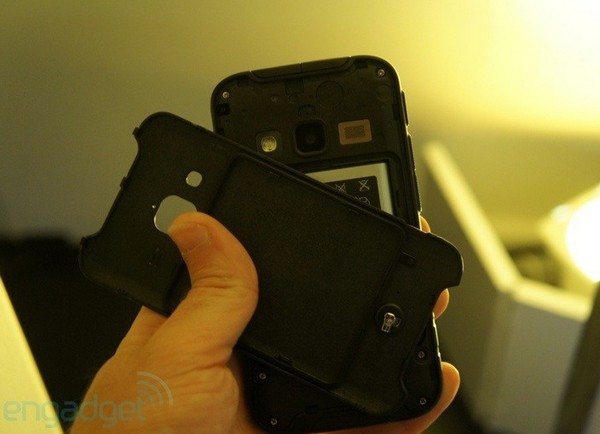 The Android handset is apparently dust proof, shock resistant and waterproof for up to 30-minutes in up to three foot of water, and does feature a customisable key, which can be used to launch the camera, switch on the torch or several other tasks you can choose from.

No word on just when the Samsung Galaxy Rugby Pro will become available on AT&T or how much the smartphone will command price wise, so all that’s left is for your to head on down and mash that play button to check out the hands on footage…enjoy.