If you are over here in the United Kingdom and have had your eyes on the HTC Desire X, but don’t wish to commit to a contract, you might like to know that the Android 4.0 smartphone is now available as a SIM free unlocked smartphone in Stealth Black in the UK, as the white version is exclusive to Phones 4u.

According to an article over on Phone Arena, the HTC Desire X is now available to purchase as a SIM free device from UK retailer Clove, which will set you back 228-quid including VAT, which is roughly 367-bucks, but you do get 25GB of free Dropbox storage for a two-year term. 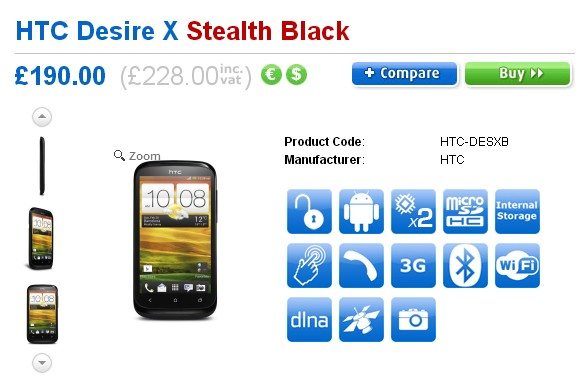 The HTC Desire X isn’t the greatest spec’d Android smartphone to come to the mobile space, but if you can’t really afford to shell out a bunch of cash on a higher end handset then perhaps the Desire X is the handset to suit your needs. So with that in mind are any of our UK readers going to purchase the HTC Desire X?