The comparison footage between the two Samsung Galaxy mid range Android Ice Cream Sandwich smartphones comes our way courtesy of Aaron Baker over at Phone Dog, with the first video lasting fourteen and a half minutes whilst the second video last ten and a half minutes, so put aside enough time to watch it all.

As usual we’ll kick things off with a specs run down of both devices beginning with the Samsung Galaxy Stellar that sports a 4-inch WVGA touch screen along with a 3.2 rear facing auto-focus camera, a 1.3 megapixel front facing snapper, a 1.2GHz Snapdragon dual core processor, WiFi, 4G LTE connectivity, Google services, Amazon apps including Kindle, Zappos, IMDB, Audible, along with Backup Assistant Plus, and microSD expansion up to 32GB and of course Android 4.0. 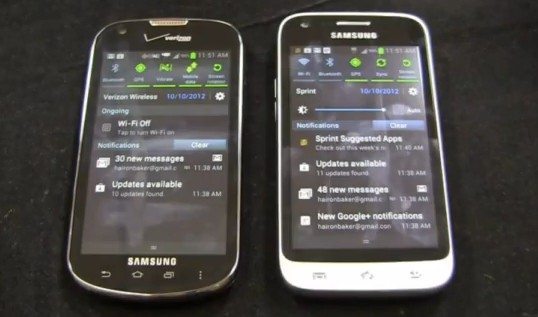 Spec wise both Android handset are very similar, but when closely compared which of these two mid range Samsung handset can come out the clear winner? Well to answer that question you are going to have to mash those plat buttons below to check out the footage…enjoy.