If you are into tinkering with your iOS device you’ll know that devs and such are trying to circumvent Apple’s security and take advantage of any gaps and loopholes in Apple’s latest operating system, iOS 6 so that the operating system can be unlocked and jailbroken, and there are differences between jailbreaking and unlocking a device, because jailbreaking allows unsigned code to run on an iOS device, whilst unlocking a device enables any SIM card to be used in the handset.

Most carriers do offer ways of unlocking older handset, but when it comes to the iPhone you’ll probably require an unlocking solution, and if you have been preserving your baseband so you can unlock your handset you will no doubt know about the jailbreak utility called Ultrasn0w Fixer, which according to Redmond Pie has now been updated for Apple’s latest operating system iOS 6. 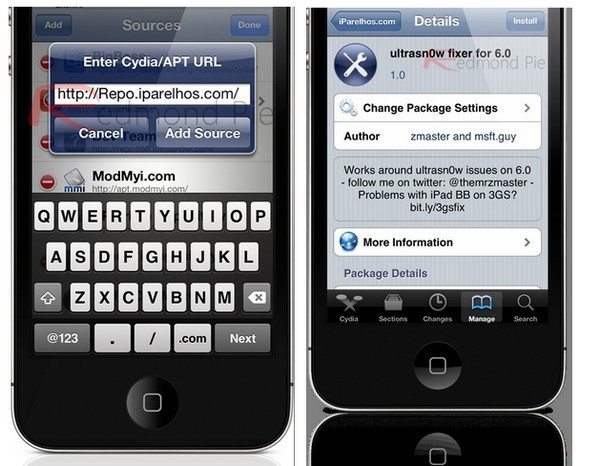 You will require your device on a jailbreak iOS 6 with preserved baseband, and then launch Cydia, hit Manage and Sources, and then add the iparelhos repository by hitting Edit, and Add, and then http://repo.iparelhos.com. Once done open the repo and look for Ultrasn0w Fixer for 6.0 utility, then hit the install button and Cydia will then do its work.

Next you need to download the latest official version of Ultrasn0w via Cydia, and then install, and once done you are done, but remember to install Fixer before Ultrasn0w otherwise it simply wont work properly.

So there you go, unlocking the iPhone 4 and iPhone 3GS on iOS 6 with Ultrasn0w Fixer, so if you do give this method a go fell free to let us know how it all goes and if you experience and problems or not by dropping us a line to our comments area below.