Of course we’ve written many articles now about the iPhone 5 and it’s fair to say that while this is another resounding success sales-wise for Apple, the phone is not without flaws. We’ve documented many reported problems now about the iPhone 5 including build quality, light leakage, Apple Maps, WiFi issues and more and it seems these concerns have been so widely reported that they made the attention of Saturday Night Live where Christina Applegate appeared in a sketch about iPhone 5 flaws. It’s a hugely funny sketch and you can see the video below our story.

Only a few days ago we discussed whether it was sensible or stupid to purchase the iPhone 5 considering these issues and other aspects and the SNL sketch actually has a dig at tech sites that have reported on the problems, maybe making a good point about how much of a frenzy this has caused. The hilarious SNL sketch starred Applegate as the host of “Tech Talk,” speaking to representatives from Gizmodo, Cnet and Wired about the various issues with the iPhone 5. The tech site reporters were then given the chance to ask questions of three Chinese peasant workers who work making the device, at what we assume would be a Foxconn plant.

It’s a very comical sketch and as well as giving us a laugh did make us realize about how we do give a great deal of attention to flaws on devices when there are so many more things going on in the world that we really ought to be more concerned about. We’re not saying that people shouldn’t care about problems with a flawed product, far from it. However maybe the hysteria that arises in the media when passing on this news is a bit over the top and we perhaps ought to be paying more attention to the workers who have to produce the products, often in very difficult conditions. 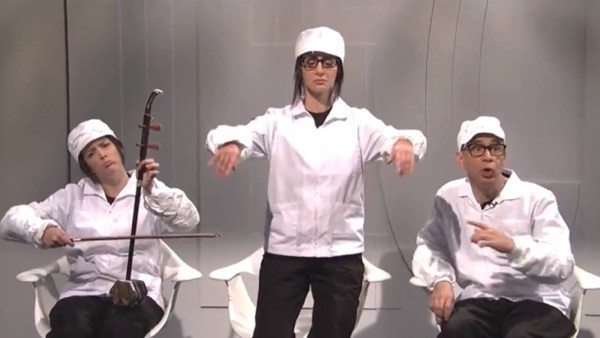 The SNL sketch highlights this in a very clever way. For example, as reported by PC Mag, one ‘worker’ was sarcastic about the fact that iPhone 5 users may be directed to a Dunkin’ Donuts instead of a Starbucks, as though this was a terrible ordeal. A worker points out that of course they don’t need a Maps app as they sleep where they work. In another extremely funny part of the sketch a ‘worker’ taunts a Gizmodo representative who dares to raise the issue of scuffing and scratches on the new iPhone, by representing his “suffering” in a traditional ‘sarcastic’ dance. Check out the video in full below this story courtesy of huluDotCom. If you enjoyed the skit you’ll probably appreciate some other great tech product video sketches available at this PC Mag link. The videos available include an Internet Explorer 9 commercial, one introducing Gmail Tap and an SNL Verizon commercial.

We’d like to know what you thought about the SNL iPhone 5 sketch. Did you enjoy the sketch although like us, it did make you think as well as laugh? Maybe you think that us techies do overplay problems with products and should stop worrying so much about minor flaws at least? Let us know with your comments.