iPad 4 with twice the power announced

Currently the Apple special event is ongoing over in the US with the company announcing a whole host of new products, which are mainly from its Mac range of computers, but the company has just announced the iPad 4 with twice the power as the third generation of iPad.

As the guys over at Engadget are reporting the new version of the iPad was called a “powerhouse”, by Phil Schiller when he took to the stage to showcase the device. The new iPad 4 comes with an A6X processor under the hood with double the CPU and graphics performance, which will bring the device up to iPhone 5 levels.

There is also a new image signal processor that is found in the iPhone 5, and the iPad 4 should have up to ten hours of battery life. The FaceTime camera is now 720p and there is dual-band 802.11 a/b/g/n Wi-Fi, and there is the new Lightening connector that was first seen in the latest version of the iPhone. 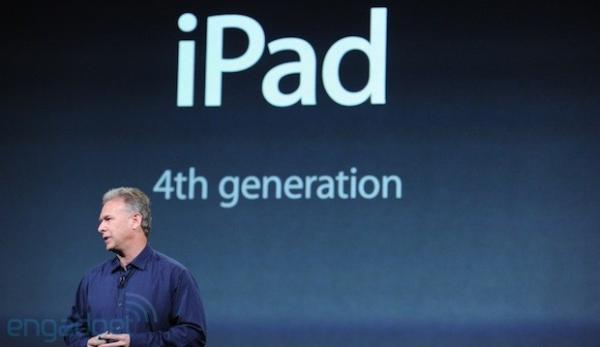 Despite the increase in performance the company has kept the pricing the same as the third generation of iPad, with the 16GB Wi-Fi model starting at $499, and the 3G model with 16GB of storage beginning at $629. Again this version is available in both black and white colour options.

While this is only a model refresh coming so soon after the last model was made available may disappoint consumers that purchased one only a few months ago.

2 thoughts on “iPad 4 with twice the power announced”