According to a report over on Primate Labs, the Apple iPad 4 benchmark result showed up on the Geekbench Browser on Sunday night, and if real, as there isn’t anything that points towards the result being faked, is hows that the latest iOS slate comes with a dual core processor hitting 1.4GHz.

The results also show that the latest iPad offering incorporates 1GB of RAM the same as the current new iPad, the same as the new iPhone 5, whilst doubling the RAM of the Apple iPad 2. 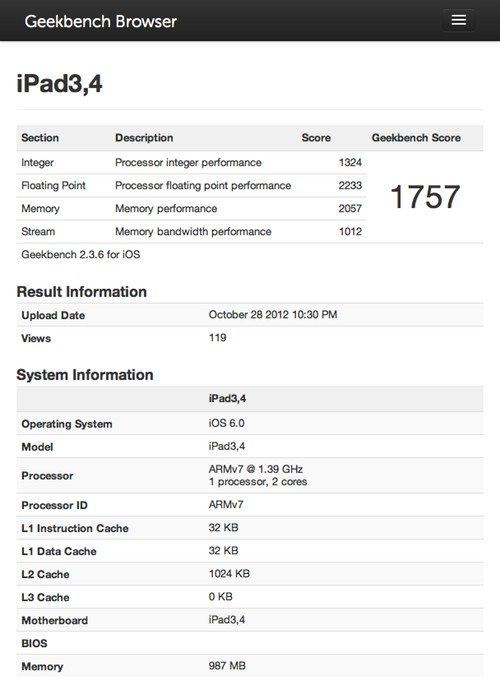 This means that the iPad 4 is 10 percent faster than the new iOS smartphone, which shouldn’t really surprise as the iPad 4 has the same processor as the iPhone 5 albeit running at a slightly higher frequency, and also means the iPad 4 is twice as speedy as the Apple iPad 2 and the new iPad 3rd generation.

Which means of course if you are after an iPad with more performance then the Apple iPad 4 looks like the iOS slate you should opt for.

Any of our readers going to be snapping up the iPad 4?