The iPhone future with new patents

With the iPhone 5 being released to a record amount of paying customers last month many people are asking what is next in Apple’s war chest of cool ideas and innovative gadgets. While the iPhone 5 offers some great enhancements over its predecessor and is definitely a more stable release in many ways, the iPhone 5 did not deliver any ground breaking new features that spur on the sense of creativity that sparked our imagination when we the first iPhone did back at its initial release in 2007.

The primary way that tech companies spend their research and development dollars is in the through the acquisition of various patents from the United States patent office. These patents are great indicators of what a company is doing next in terms of its future direction. The great thing is that these patents are in the public space and can be searched and researched by anyone who has he patience to wade through these mountains of technical documents.

Projector
This is a really cool idea from Apple if they are able to pull it off. The idea is that an iPhone can not only project an image on a screen or wall in a dark room, but that it can also read a projected image from another iPhone. The iPhone would be able to share data through projected images, and it would also be able to interact with the other image in real time. So two or more iPhones would be able to project on the same wall and then interact with each other, creating an interactive shared presentation experience.

Bezel
One of the cool things from an interface perspective that Apple may be looking into is changing the amount of real estate can be used on the iPhone. In particular, the bezel areas of the iPhone have been underutilized from an interface perspective. With this new patent, Apple is planning on utilizing the currently unused bevel space to present interactive virtual buttons. These buttons could be context or application specific and would change position based on whether you are holding you iPhone horizontally or vertically. 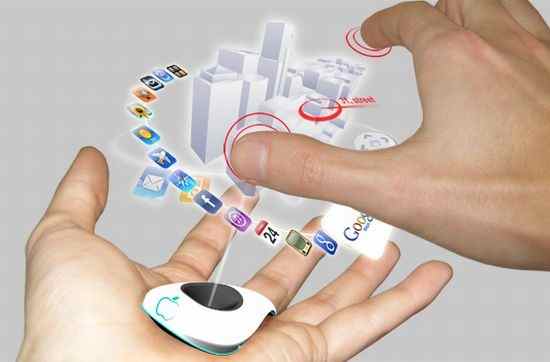 Image above via Future Technology

iPaper
With the runaway success of the Amazon Kindle and eBook readers everywhere, Apple has patented its own version of electronic paper that can be read on a small screen for mobile devices. The cool thing about Apple’s iPaper is that it is not just another copycat book reading format. With the iPaper technology, iPhones of the future may have the ability to switch back and forth between a glossy screen for traditional digital display read outs to the e-paper format for books and other online correspondence such as utility bills.

Transparent Display
Another cool feature that we could be seeing in future versions of the iPhone is a transparent display. The transparent display is a kind of augmented reality application that will allow users to hold up their phone and view a certain place of interest through the phone and then create floating commentary or informational bullets in real time. This kind of augmented reality is getting a lot of buzz right now due to projects like Google Glass and may see the light sooner than we think.

What ideas can you come up with for the iPhone of the future?

Author Bio: Jason Phillips wrote this article. There are a number of topics in which he prefers to write like software, hardware and latest gadgets. In his last article he recommended ipad 3 screen protectors to protect the new Apple product.

3 thoughts on “The iPhone future with new patents”