If you are one of the iOS faithful over in the United States sporting an iPhone 5, you could be on the lookout for a few iPhone 5 accessories to become available. So what we have today for your consideration is a couple of accessories for the latest Apple smartphone that can now be pre-ordered to play nice with your beloved new iPhone.

The two new iPhone accessories are the Belkin Car Charger with Lightning Connector, and the Belkin Charge + Sync Dock with AUX port. Both of course for the iPhone 5, and available to pre-order right now from Belkin with an expected shipping date before the 15th of November.

The Belkin Car Charger with Lightning Connector is an updated version of the firm’s slim profile car charger, and features a hard-wired four foot Lightning cable, along with featuring over voltage protection, and sports a green indicator light.

The Belkin Car Charger with Lightning Connector is apparently the first and only car charger that has been designed for the iPhone 5, allowing for unlimited play and standby time, along with that low profile that sits flush with your car’s dashboard. 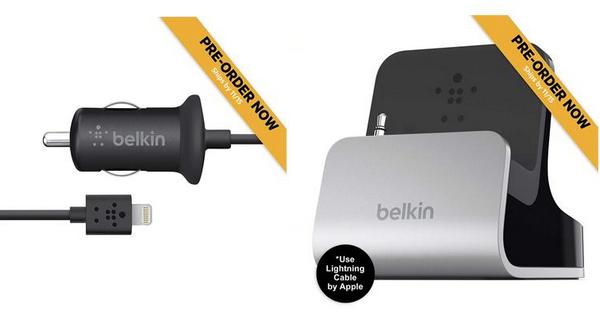 As for the Belkin Charge + Sync Dock with AUX port, the accessory is case compatible, and features a foldaway AUX jack, is channel ready for easy cable feeding, has an EarPods audio-out port for either speakers or headphones, along with featuring a magnetic base.

The Belkin Charge + Sync Dock with AUX port, enables the user to both charge and sync their iPhone 5 at the fastest possible speed, and is for use with an Apple branded Lightning connector only, although the cable is not included.

For those that might like to place a pre-order for either or both iPhone 5 accessories from Belkin, the Car Charger with Lightning Connector commands a price tag of $29.99, and likewise the Charge + Sync Dock with AUX port also costs $29.99.