Microsoft Surface reviews worth looking into

In the last couple of weeks the already crowded tablet PC market place has seen some new additions join the party in the run up to Christmas. One of these is the Microsoft Surface device that was launched to great fanfare by the company, and as with any new tablet PC it gets compared to the Apple iPad, but we are now looking into some reviews of the device.

First we have a review from Slate.com who has spent over a week with the Surface, and the person using the device didn’t take long to come to the conclusion there are a number of problems with the unit. In only a couple of days it was found that the device is not as good as the iPad with a number of bugs being found.

The price of the unit is not great either starting at $499 and that doesn’t include the touch-cover keyboard, which comes in at another $120. This compares to the new iPad 4 that also starts at $499, but the iPad 2 can be had for $399 with the iPad mini starting at $329. It was found to be strange that there were issues with the Surface considering the amount of time Microsoft has been working on the device.

A big problem with the new tablet was the speed of the device with even the simplest of tasks taking half a second more than you would have thought, and when added together with every action performed on the device adds up to quite a lot of wasted time. 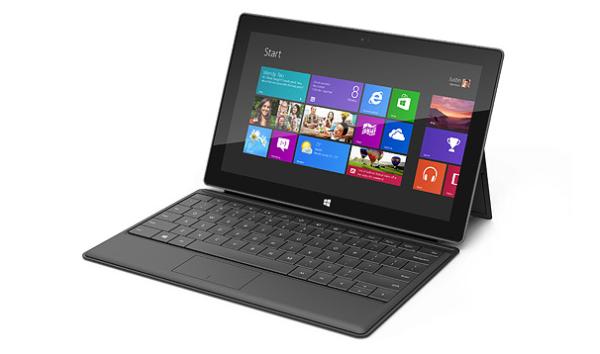 When deciding to pinch to zoom on a Web page at first you are met with text that looks jagged and at low-res, before getting sharper after a small wait. Switching the device between portrait and landscape mode also experiences a slight delay, and this could be put down to the processor and RAM not being up to the job with future refreshes possibly fixing this.

The design of the surface was found to be sturdy with the handy feature of having a built in kickstand going down well, but when picked up it felt heavy and is actually 20g heavier than an iPad 3. Compared to the Retina Display of the last two versions of the iPad, the Surface was found not to be as sharp with text being easier to read on the offering from Apple.

In use the Touch Cover with its built in QWERTY keyboard was found nice to use, and when folded away provided a really flat cover protecting the device. Obviously one of the attractions of the Surface is the Windows operating system, but it is a cut down version that is not compatible with software you may have on your PC.

Instead you will have to install applications from the Windows Store, but the Surface does have some of Microsoft’s Office features pre-loaded. The review finishes by saying that the Surface will allow users to do everything they need, but they may not enjoy doing it.

Another review on Computer Weekly commented on the sturdy design of the Surface but the weight of it makes it heavy to hold with only one hand for over 30 seconds, but the added bonus of a full USB 2.0 port and expandable memory via microSD card makes up for it.

Typing on the keyboard was found not to be that easy as quite a bit of pressure is needed on the keys, but it could just be a case of getting used to it. When using the Office suite or having the device in desktop mode users are greeted with the normal Windows feel but reduced in size, while the reviewers fingers were too big for the touch buttons, which meant that sometimes the wrong buttons were pressed.

At the moment the Windows Store has a small range of applications available with only 74 designed for business use, but hopefully this will quickly change. The Surface will be ideal for businesses that already use Windows and long term the device should offer a worthy alternative to both the iPad and Android tablets, but for the time being it is just a supped up typewriter. With any new product it will take time for consumers to get used to it or give it a try, and the first reviewer mentioned the processor not up to the job, but it uses the quad core Nvidia Tegra 3 that is certainly no slouch.

Will you be getting the Microsoft Surface?

One thought on “Microsoft Surface reviews worth looking into”