With smartphones these days everyone wants their battery to last longer so they don’t have to keep on charging their device. The more tech advanced a smartphone becomes, the better the battery needs to be. But over the years the humble handset battery hasn’t really improved a great deal, but that might change in the future.

It appears that an improvement in smartphone battery performance could be on the cards. The word is a research team at Rice have made a bit of a jump in the battery area by using a crushed silicon anode, and say they have almost tripled the energy density of current Li-ion batteries.

According to a report on the matter to Nature Scientific Reports, although not yet published, research scientist Madhuri Thakur, and engineer Sibani Lisa Biswal claims by crushing porous silicon they managed to dramatically reduce the volume that is needed for anode material. 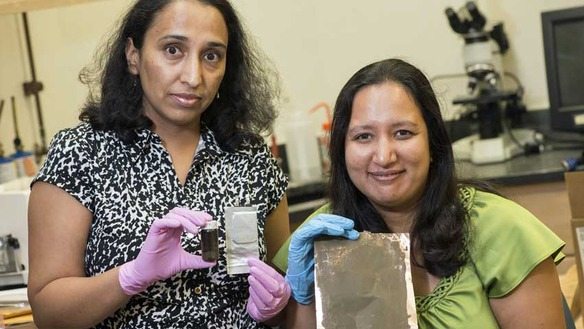 Silicon can apparently hold ten times more lithium ions that graphite, which is commonly used in today’s anodes. However, Silicon triples its volume once completely lithiated, and the swelling and shrinking makes silicon break down rapidly.

The two then decided to crush a porous silicon sponge in order to make them more compact, the results of which is a new battery design that will hold 1000 milliamp hours per gram through 600 charge and discharge cycles at 2 hours to charge and 2 hours to discharge.

Obviously we are not going to see crushed silicon batteries in smartphones any time soon, but this sort of technology could revolutionise smartphones, we will be able to spend much longer on the phone before thinking about charging.

One thought on “Li-ion crushed silicon batteries for revolutionise smartphones”