At Phones Review we endeavor to bring readers comparisons of some of the most-anticipated smartphones from time to time. For those of you who favor the phablet type of smartphone with a large display then today we are taking a look at the HTC Droid DNA vs. the Samsung Galaxy Note 2 in a bid to help readers decide which they might like to add to their holiday wish lists.

The Galaxy Note 2 is already available in the US on Sprint, U.S. Cellular and T-Mobile and is also due for release on AT&T and Verizon shortly. The Droid DNA is heading to Verizon and has been previously referred to as the DLX and also the Droid Incredible X. We’ve seen more and more leaks about the Droid DNA and we are hoping that it will be revealed officially at a press event on November 13, with a release date soon afterwards.

It’s thought that the Droid DNA will be based on the HTC Butterfly, another 5-inch HTC device recently launched in Japan that many consumers in other regions said they’d like to see sold where they are. We’ll take a look at some of the main specs and features of the Galaxy Note 2 and Droid DNA but bear in mind that as the Droid DNA is not yet official, specs used are unconfirmed at this time. Specs for the Galaxy Note 2 on the other hand are confirmed.

Processor
The HTC Droid DNA has a 1.5GHz Qualcomm Snapdragon processor while the Samsung Galaxy Note 2 has a 1.6GHz Quad-core Exynos processor. 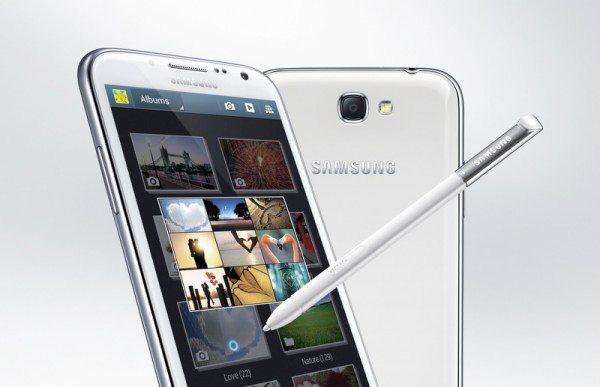 Display
The Droid DNA has a 5-inch LCD-3 Full HD 1080p display and as it’s based on the HTC Butterfly it could have a hugely impressive 440 ppi. The Galaxy Note 2 steps up to an even larger display with a 5.5-inch Super AMOLED HD display with 1280 x 720 resolution and 267 ppi.

Battery
The Droid DNA is likely to have a 2020mAh battery and the Galaxy Note 2 has a larger capacity 3100mAh battery. 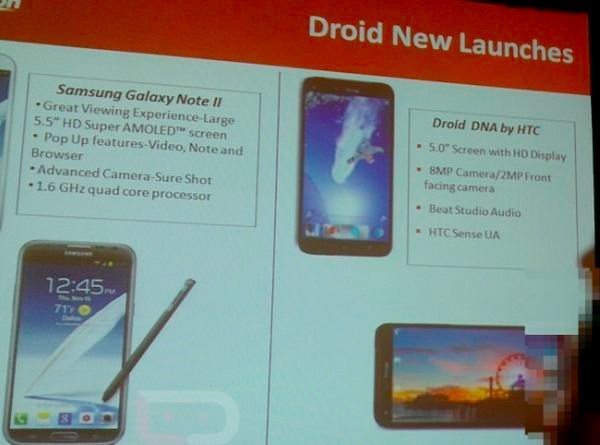 Operating System
It’s not yet clear what the Droid DNA will be running on but the most likely option would be Android 4.1 Jelly Bean. Up until very recently this would have been the latest Android update but Android 4.2 Jelly Bean will arrive with the LG Nexus 4 pure Google smartphone soon. The Droid DNA is also likely to feature the latest version of HTC Sense. The Galaxy Note 2 will be running on Android 4.1 Jelly Bean, with an update to 4.2 Jelly Bean to come later.

Price
The HTC Droid DNA is rumored to be priced at $199 with a contract on Verizon. If this price is accurate it could be a key deciding factor for consumers as it’s much less than the $299 on-contract price that most US carriers are charging for the Galaxy Note 2.

There’s an awful lot to impress for both of these large-screened devices but we’ll just add a few more pointers such as the fact that the Galaxy Note 2 also has NFC support and the use of the S-Pen stylus. Both the Galaxy Note 2 and Droid DNA support LTE. Of course design is very much a personal preference too and the Galaxy Note 2 is very akin to a larger version of the Galaxy S3 phone. The Droid DNA on the other hand is likely to be very slim and as it’s based on the Butterfly, which drew praise for its looks, we can only imagine from leaked photos that it will be just as impressive. Remember that as far as the Droid DNA is concerned we do not yet have full official specs and what we have given here are rumored details.

To be fair these two smartphones have a lot of similarities too and are both likely to be smash-hits for Verizon, especially with the busy holiday season upon us so we’d be really interested to hear which one, gets your vote? Of course you may have another handset in mind such as the iPhone 5 or the LG Nexus 4? If you were to choose right now though, between the Droid DNA or the Galaxy Note 2, which would you opt for? Let us have your comments on this.